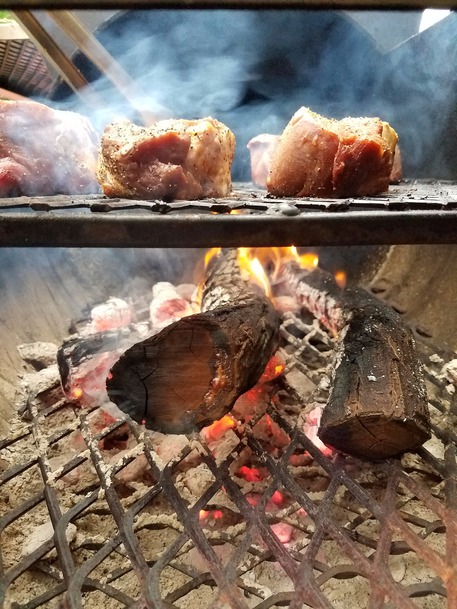 Smoking meat dates back to the age of cavemen — at least that’s what’s believed since there weren’t a lot of cookbooks back then. Meat hung in the cave and a fire slowly dried out the flesh, preserving it while also keeping the tendons tender. You’d think DIY-ing the process shouldn’t be too tough.

These days, smokers can cost thousands of dollars, or next to nothing. It all depends on how professional you want to be about your cooking. The key to successful smoking is maintaining a consistent temperature inside the smoke chamber. Too much heat will dry out the meat. Too little heat won’t cook it. Below is a range of DIY options to consider. If you take a look and think you just want to cook and not worry about building anything, view these barbecue smokers and you’ll get see what your money can buy.

To build a top shelf barbecue smoker, you’ll need a saw that can cut metal, the ability to arc weld and a high tolerance for sparks. In the above video, Bradley Robinson from Chuds BBQ doesn’t explain all of the steps to building a steel cylinder smoker, but gives you an idea of what’s required.

This isn’t a project a newbie can just rent a few tools and hammer out in an afternoon. You'll need to be pretty comfortable with welding. For example, while creating the door, Bradley tacks down the ends of the with beads so that it won’t warp during the build, then he removes the welding material later to reopen it.
For the firebox, he builds a V-shaped bottom, which helps direct the heat upwards. He also places insulation underneath each of the panels. The shape helps create an air gap underneath the wood, so the fire is a bit cleaner. He also adds an “X” of beading to the top of smoke box to stop the metal from warping when wood burns inside.
After the structure is built, the grates for holding up the meat are built and a smokestack installed. Rods are attached to hold up a water pan inside the smoker. A magnetic level comes in handy for measuring out the smokestack. Holes and buckets for catching grease are attached underneath and s space for a thermometer is made in the door. As a bonus cooking area, Bradley adds a small charcoal grill on top of the firebox. Once the build is complete, he coats the metal surfaces with beef fat, like a cast-iron skillet, to keep away rust.

You don’t need to be welding wunderkind to build a smoker. If you’re open to having a stationary unit, you can build one out of cement blocks and wood.

In the above video, SpearFin demonstrates how to build a flat bed and rectangle walls out of bricks big enough to fit around a small wood burner with a vent on top. Measure the burner you’re going to use and add at least a couple of inches of wiggle room around it. On top of the cement box with the smoker inside, build a rectangular wood frame.
The walls don’t need to be anything fancy: Chipboard will help keep the smoke in. Another layer of tongue and groove cladding makes the smoker a little more presentable and even down-home quaint. Attaching a strip of sheet metal and slate shingles to the roof of the barbecue smoker will help keep water out.
Line the inside with fire board to keep the wood frame from overheating. Outside, a second coat of render will give the cement sections a smooth finish. Also use the render to seal up the bottom of the smoker and keep fumes from seeping out. For the meat racks, attach grill shelves with screws or build brackets to hold them up.

If you want a smoker but don’t have the time or money to build something permanent, it’s possible to create one out of disposable foil pans. While you won’t be able to smoke large cuts of meat, you can certainly do steaks and fillets.

As shown in the Sous Vide Everything video above, this project begins with two large foil aluminum baking pans. A barbecue rack or cookie cooling rack can be used to hold the meat in the smoker.
In the corner of one of the “top” pan, slice a two inch square with a box cutter to let the smoke vent out. In the bottom pan, cut out a two inch square in the bottom left corner. Roll two cups of wood pellets (which will be used instead of wood for the fire) into a sheet of aluminum foil, so it looks like a burrito. Poke tiny holes into the foil package with a skewer.
Cut off each end of the aluminum “burrito” so air can get in and feed the fire. The rack should be lifted off of the bottom of the pan, with with bricks or fire resistant material. Place the roll of wood pellets underneath the rack. Stack the top pan on top of the bottom. Binder clips (the ones you find in an office) are used to hold the two halves together. The burrito needs to be fired up good and hot before the smoking can begin. Once it is fired up, you can put the meat in place and the cover on top to start smoking.
Rate this post 0.0 rating Report post