How to Build Your Own Quadcopter Drone 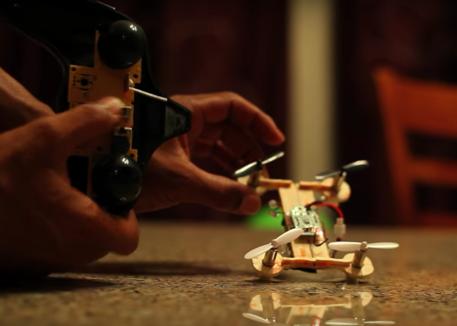 Flying drones do a lot more then monitor and annihilate enemy combatants. For civilians, they can carry a camera for aerial photography and potentially deliver your next Amazon order. There’s also the new racing drone pastime. If you know how to solder, building a drone is surprisingly easy and affordable. Some can fly digital camera; others will carry a human. Not sure where to start? You may want to get some inspiration from the best commercial drones. Once you’ve seen some of the amazing flying machines being sold, you can start thinking about making your own drone. Watch the videos below to understand the basic electronics, machinery and homemade possibilities.

Parts of a Quadcopter

For those who think a quadcopter looks just too complex to make in a garage or basement, Riley from DIYThingsThatFly itemizes all of the parts and how they’re assembled. The motors, electronic speed controller (ESC), frame, soldering, power distribution board, battery, flight controller, video transmitter, camera, connectors and power wires are all explained. Riley also gets into voltage regulation and explains how these parts work together to make the frame fly. And how does Riley explain all of this cutting-edge electronics? Using a piece of cardboard.

Xt-Xinte shows how to assemble all of the parts of a quadcopter, going into detail about soldering and mounting the flight controller. What begins looking like a spider covered in spaghetti wires ends up looking like a professional quadcopter. Having someone talk though the project will make it easier to build your own.

Gimbal Guy explains how he assembled spare parts from other copters using a Dremel, screwdrivers, glue, tape and solder to make a micro drone. Given that the frame is built from light wood, the project demonstrates how simple a drone can be.

While most DIY drones require assembling manufactured parts, the frame and propellers of this quadcopter are 3-D printed. Cubify gives away the plans for free as a way to inspire you to buy one of their printers (or to know what to do with one once you’ve bought it). The project is cool, although doesn’t fly as far as some of the drones made from manufactured parts.

Bijou Molek’s project is definitely comes with a “Don’t try this at home or anywhere else” warning. He attached a bucket seat to eight metal propellers. It’s probably a good thing he doesn’t explain how the drone was made. The majority of tinkerers tempted to build one would likely wind up with a concussion or worse. Bijok’s drone hovers in the video, but doesn’t go forward or back anywhere. Still, it’s both astounding and unnerving to see the POV perspective.

Now that you have a DIY drone what are you going to do with it? Chris Anderson, former Editor-in-Chief of Wired magazine, explains how he fomented his passion for DIY drones into a company that manufactures drones used to monitor crops. Farmers can view aerial video of their products and also see them through an infrared lens. Just imagine, if you get good enough at building your own drones you might just be able to start your own company!