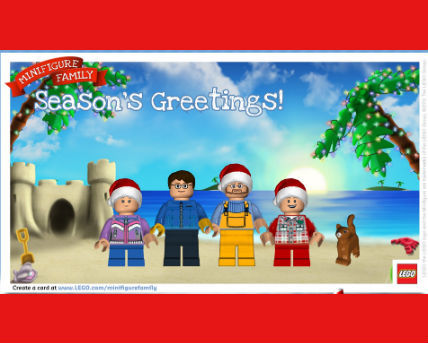 On a recent visit with my nephew, I was amazed to find that in this era of advanced video gaming we spent most of our time brainstorming projects he could do with LEGO blocks. Finished LEGO models, almost-completed attempts and piles of bricks dot the floor of his room. Can an X-wing fighter become a boat? Will that western storefront really miss a few pieces? So much is possible if you envision life on a LEGO grid (which he does).

LEGO also understands a bit about the digital game. I got word that you can morph your friends and family into minifigures for a holiday e-card. (This was going to be earth-shattering news for my nephew, I was sure.)

The LEGO Minifigure Family site interface makes recasting your family into squared-off minifigures a matter of pointing and clicking on facial expressions, hairdos and outfits. Do you want to make them wear a cowboy hat or mullet? What about an devilish handlebar mustache? Given that this e-card is going to make the rounds on the Internet, you may opt for flattering choices.

My nephew's close-cropped cut is near enough to a minifigure's that the pre-fab menu nicely replicates his 'do. After suiting up his sister, mother and father, I placed them in a LEGO lodge since they enjoy camping. (Other choices include an igloo and an ornament-trimmed living room.) As soon as I was done, I sent it over to my sister.

You know what? Turns out my nephew had already remade his family as minifigures before I did! He put almost everyone in Santa Claus hats on the beach. I think his minifigures might get a little toasty under those furry red caps, but it still makes for a cute e-card.

This post brought to you by LEGO. All opinions are 100% mine.