How a Math Geek Became a Knitting Pattern Designer 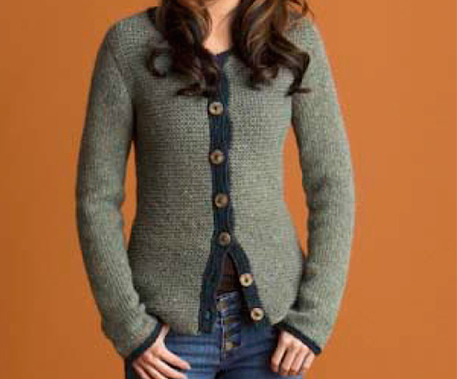 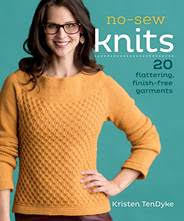 Knitwear and crochet designer Kristen TenDyke has written a new book, No-Sew Knits — 20 Flattering Finish-Free Garments, in which she teaches how to knit the perfect sweater seamlessly with no assembly required.
Next week, we'll share some of her best tips and insights from her book, but this week we wanted to get to know her better and learn what inspires her as a designer.

CraftFoxes: How long have you been knitting and crocheting? Who taught you how?

Kristen TenDyke: My mom taught me to crochet when I was 8. I had some pretty rudimentary skills, and didn't know what a gauge was, but I loved making things and trying them on my dolls as I crocheted to be sure they fit. I dabbled with crochet on and off through college, making hats, scarfs and afghans. After graduating college with a graphic design degree, I saw an ad for a graphic designer who could knit. At the time, I didn't know how to knit, but I'd attempted a few times to no avail. I didn't apply for the job, but I was intrigued that there was a possibility of working with yarn as a graphic designer. Not long after that, I was given the book, Stitch 'n' Bitch Nation and taught myself to knit. Three months later, I saw the same ad again! Now I technically knew how to knit, so I applied and got the job as the graphic designer for Classic Elite Yarns. 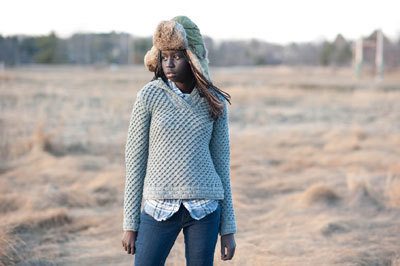 Tundra Sweater (photo: Carrie Bostick Hoge)
CF:  What was it like going from being a hobbyist to a published designer?
KT:  While working at Classic Elite, I was very encouraged to design and submit patterns to them, and to magazines and books. My fellow employees taught me what a design submission should include (a swatch, sketch, written info about the design and a schematic for the proposed measurements). Like a giddy schoolgirl, I sent away my submissions. The very first thing that I had published for a magazine was a red woven scarf that made the cover of Vogue Knitting's holiday 2005 issue. I was hooked! There's an amazing thrill that comes from having a design published in a magazine, not to mention getting it on the cover! 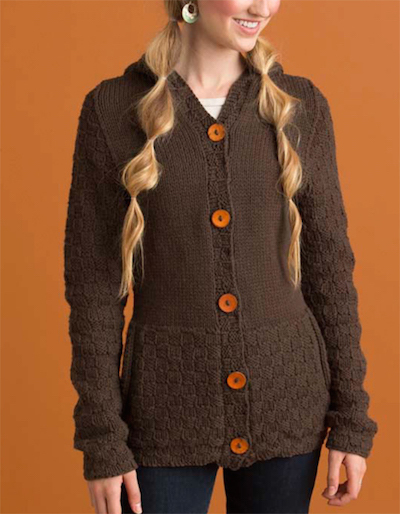 Merci Hoodie (photo: Joe Hancock
CF:  Do you have a preference for crochet vs. knitting?
KT:  I love them both for different reasons. Crochet was my first love, and it holds a special place in my heart. Like when I was young, I still love the fun of crocheting accessories or sweaters for myself without a pattern. If it comes out well, I might write a pattern for it afterwards. I love knitting (and the pattern writing and editing) because of the math. I was one of those math geeks in high school who read books during math class, but somehow still aced the tests. There's math involved with crochet too, but the difference is that a crochet pattern says what stitch to make and where to put it. But with knitting, it just needs to say what stitch to make, so I find that to be easier. Once I learned the basic measurements and figured out the math for women's sizes, writing knit sweater patterns was one of the most fun things in the world to me! 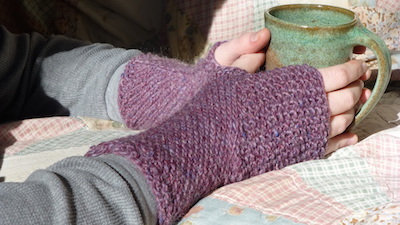 Hasta Mitts (photos: Carrie Bostick Hoge)
CF: How did you get started with promoting eco-yarns? What was your "a-ha" moment?
KT: While on a camping trip in 2006, I was reading a book, Be Here Now by Ram Dass, where he says that "you can't rip away caterpillarness," meaning that you can't rush into becoming something other than what you are, right here and now. That phrase stuck with me and somehow morphed into the name "Caterpillar Knits," but I didn't know what to do with it. So I sat on it — not rushing it forward into something other than what it was at the time. I spent the next few years working on some deep inner cleansing with a vegan diet, yoga, meditating, learning Reiki, living simply in a tiny house, etc. I believe that in order to help the planet, we must first help ourselves. I soon realized that I wanted to help the planet by choosing to knit with only yarns that benefit the planet, rather than harm it.
I researched eco-friendly yarns and found there wasn't much information available. So I created a line of patterns and a site with yarn reviews to help spread the word and encourage more eco-friendly yarn production. It only seemed fitting to call it Caterpillar Knits. It's a slow-growing collection of patterns, but I'm constantly on the lookout for eco-friendly yarns. And to this day, while I'm not eating as crazy-healthy as I once was, I still prefer to use the yarns that are healthy to the planet over the alternative whenever possible.

Come back next week when Kristen shares more from her book about no-sew construction for knitted garments!