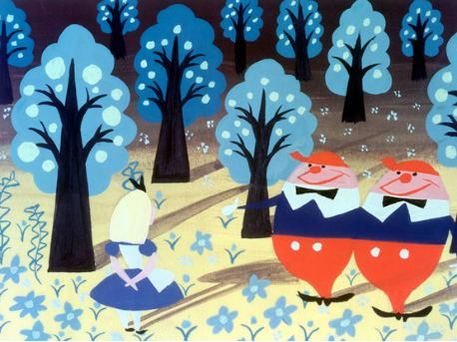 Google saluted Walt Disney artist Mary Blair with a doodle on its home page today (Oct. 21, 2011). Blair — known for the concept art she created for the Disneyland ride "It's a Small World" and Disney movies Alice in Wonderland, Peter Pan, Song of the South and Cinderella — would have been 100. Her style, as seen in the mural she drew for Disneyland, influenced numerous other artists who grew up watching the movies she worked.

Big fan looking to score a collector's item? While many of the collectibles in the store Magic of Mary Blair (which is run by her nieces) are sold out, plenty can still be found on eBay and Etsy.

Above is "Meet the Tweedles," a limited-edition reproduction of concept art from Alice in Wonderland that has been recreated as giclee on canvas. For hardcore Mary Blair fans, the hefty $250 price tag just might be worth it.

Love the lady but don't have the cash? No worries, most of the other collectibles are easier on the wallet.

This Mary Blair ceramic vase was created for the 40th anniversary of Walt Disney World and features images of Native American children. It's only 10 inches tall but makes a strong, colorful statement for a reasonable $49.99.

Want something a little subtler and more wry, yet still shows your appreciation for Mary Blair? How about a 1959 Pall Mall cigarette ad? Yep, those blossoms are pure Mary and will only run you $9.99. 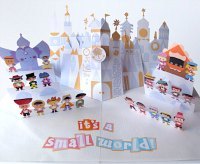 Artist Jackie Huang created this pop-up for an "It's a Small World"-inspired art exhibit. There are only 10 in existence and each is signed by Jackie. Is it worth $240? That's for your wallet to decide. 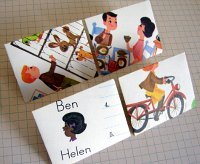 For those who want a little upcycled Mary Blair, Maxine Louise has created a one-of-a-kind stationery set out of an old elementary school workbook on language arts. It's unclear if the artwork for the workbook was created by Mary or just inspired by her. At $8.95, you're not gambling too much.
Rate this post 0.0 rating Report post