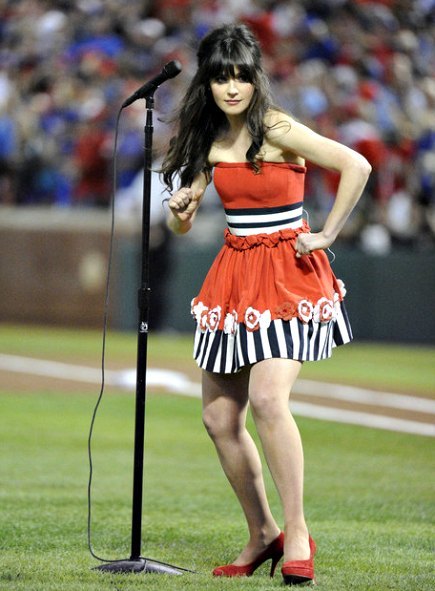 When Zooey Deschanel, the darling of alt-country hipsters, prepared to sing the "Star Spangled Banner" at the championship for America's national pastime, she had a tough style call to make. The Fox TV execs who signed off on her "New Girl" sitcom and undoubtedly arranged the World Series invite didn't want her to look too ambivalently alt for mom and dad on the living-room couch. On the other hand, kids who will continue to attend her concerts (as one half of the duo She & Him) wouldn't exactly approve of her singing to the most mainstream audience in America without a wink.

Zooey played the moment with doe-eyed deftness, turning the Star Spangled Banner into a countrified torch ballad and wearing a dress so patriotic she looked like she was leading a July Fourth parade. It was so cute and endearing that both the flag wavers and irony police could give the nod.

Love that red, white and blue style? Well, it may not be Independence Day, but we've found some dresses that can make you look like you're marching to the beat of your own drummer even if you're not singing the Star Spangled Banner at the World Series.

Have other suggestions for Zooey style? Drop them in the comments.

Pinup Girl's red satin sun dress doesn't exactly look like you ripped off the bunting from the front of the July Fourth parade reviewing stand, and that's probably a good thing. You can wear this pleated skirt with a fitted waist at shindigs beyond Independence Day and not be out of place. ($118 at Pinup Girl)

The Ginger Dress at Pinup Girl

Like the Evelyn Dress, the Pinup Girl's Ginger has a retro style with a fitted waist and pleated skirt. The difference is an eyelet ruffle trim that adds a down-home accent. ($118 at Pinup Girl)

While this dress doesn't have quite the bombs-bursting patriotism of Zooey's outfit, it does have the right color combination and a style you could envision her wearing. Jennifer Gomez's nautical number features a braided red belt with an anchor button. ($67.15 at Etsy)

Before you start getting concerned about our suggestions being a bit too much, this Daisy Kingdom-style cotton jumper is meant for children. As the creator, Mom2rtk explains, the dress offers "two yards of twirling fun." ($49.99 at Etsy)

If you want your daughter to wear her political affiliations on a sleeveless outfit, the Democratic Pillowcase dress will do niecly. That is if your toddler doesn't vote Republican. There doesn't appear to be a GOP-friendly version of this outfit so we smell an opportunity for a Grand Old Party seamstress. ($12.99 at Etsy)

So what if this red, white and blue dress with a fitted waist was sewn for an 18-inch doll? Patterns can be adapted. Hmm ... was American Girl inspiration for Zooey's ribboned and ruffled ensem? ($9.99 at Etsy)