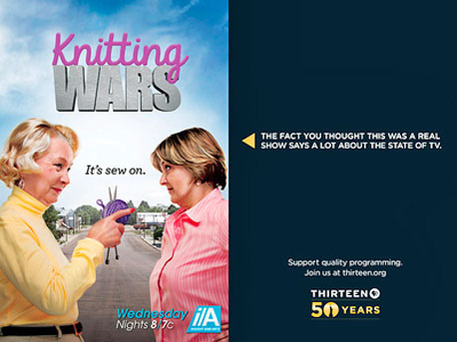 For its 50th anniversary, PBS’s New York City station (WNET Thirteen) will launch a series of subway ads poking fun at the state of reality TV programming with fake show posters like “Knitting Wars." The goal? Remind viewers how silly reality TV can be and bring them back to the thinking crafter’s network.

A few other pretend show posters include “The Dillionaire,” “Bayou Eskimos” and “Bad Bad Bag Boys” while each poster features a clever tagline. For “Knitting Wars,” for example, the hook is, “It’s sew on," and the show about the pickle-making millionaire states, "Life's a pickle." But with each poster comes this important message highlighting the show's faux-ness: “The fact you thought this was a real show says a lot about the state of TV. Support quality programming. Join as at Thirteen.org."

While we can’t help but appreciate PBS poking fun at our less-than-sophisticated TV tastes, we still wonder “Why not?” when it comes to a knitting reality show. Perhaps there’s a following for a reality TV show that demands a knitting speed contest or using unique materials like bacon or dental floss to make a baby blanket. Or perhaps not.
To see more of the posters or learn more about the publicity campaign, head to The Wrap.