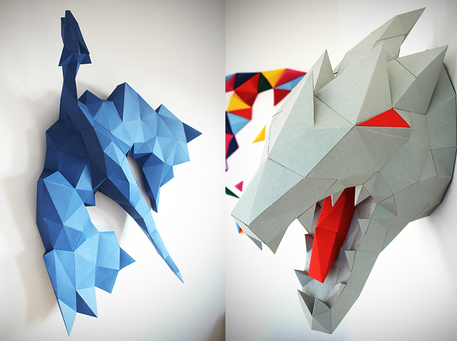 Origami may be fun, but is it stylish? That's the question architects Dušan Cvetković and Andreia Cabanas are about to tackle with their new Indieogogo project, Polimind. The couple makes kits that can be built into dragons, aliens and geometric artwork you can hang on your walls. Cvetković describes the Polimind projects as a mix between origami, paper craft and puzzles.

Starting any business, even one where the kits are made out of card stock, takes capital. Polimind plans to set up shop in Portugal (Cvetković is Serbian and Cabanas is Portuguese) and to get the business started they're crowdfunding on Indiegogo, with a $21,000 goal. You can order a model and give money to the campaign simultaneously. A dragon head with all of the pre-cut pieces is about $42. If that's a bit much, you can also get the PDF of the same model for $6.50. You can even get an origami bow tie for just a little more than a dollar.
The campaign continues until April 15, 2017.
Want to get a taste of Polimind? We have their heart model posted on the site so you can download it.

Here's a demonstration of the Polimind dragon body assembly. Looks like a good project to keep a teenager or Game of Thrones fan busy for an afternoon or two.

Dušan Cvetković and Andreia Cabanas make their pitch for Polimind.