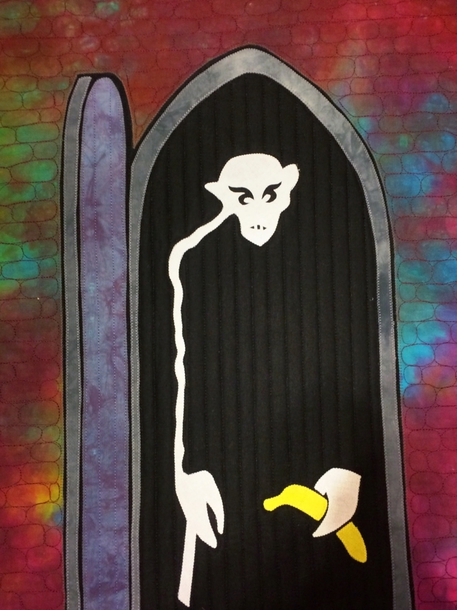 Frank Palmer wasn’t surrounded by quilts growing up and didn’t come from a crafty family. But his parents owned several wool military blankets, and most had holes in them. By the age of eight, Palmer had taught himself how to sew on his mother’s Morse sewing machine, a wedding gift she had little interest in. At age 14, he patched a hole in a wool blanket by hand and liked the look, so he continued covering the surface until there were only patches, no wool. It was his first “quilt.” Palmer has developed his technique quite a bit over the years and while he helps finish other quilters’ works during the day, at night he makes illustrative pieces filled with the humor and pop culture references many traditional threaders frown upon.

Did you learn traditional quilting or were you always interested in a distinctive approach?
I got a library book to learn how real quilts were made. I loved the traditional patterns and designs, but could never afford the yardage necessary to make anything that wasn't scrappy. My early quilts were created with old clothes, tablecloths, thrift store finds, old sheets, or anything else I could cut up and use. Nothing looked like the quilts in the books, but I thought they were treasures at the time, and kept trying. Like most quilters, I cringe at the thought of the early pieces.
How do you describe the quilts you make?
I consider them art quilts, though I’ve made a great number of bed quilts. My art quilts are usually derived from artworks or ideas, and influenced by whatever I need to work through at the time. Every piece, whether it's a three-by-five foot miniature work or a king-sized bed quilt, can be classified as some sort of intensive therapy. I admire people who are able to talk through their feelings or process their inner struggles with cognitive therapy or medication, but I was never equipped that way. Whether the feelings are good or bad, the wave comes and develops itself into a finished product. 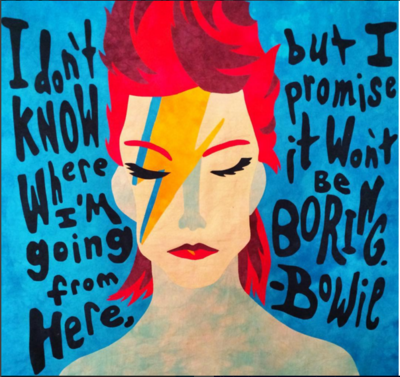 For The Craftys, you nominated one quilt featuring David Bowie and another of Nosferatu. How have these icons influenced you?
The Bowie piece was cut and assembled the day his death was announced. I wasn't as influenced by his music as most were, but I found his energy and approach to life a tremendous inspiration. The quilt top was pinned to my studio wall for a few months before the detail stitching had begun. I like to immediately start a project and assemble it (like writing a Post-It Note) and keep it in front of me to remind me to deal with that emotion. When I'm ready, I sit down and do the surface detail, stitching on the appliqué, which can take a few hours or a few days, and is highly meditative. The quilting process afterward is like a follow-up appointment. Nosferatu, on the other hand, is a translation of an artwork by pop artist Trevor Wayne from his Horror Banana series. I'm a longtime fan of his work, and he was very eager and happy to allow me to interpret his work in my hand-dyed fabric. The character isn't directly influential, but the image is very reminiscent of something I was dealing with in my past. I've also recreated cartoon characters, tattoos, images from my head, political commentary, controversial and/or salacious images, and other people's dreams. One quilt featured a skull perched on top of a bloody toilet plunger, and, while shocking and confusing to some (and amusing to many), it helped me realize that everyone can find their own meaning in a piece. What inspired me to create it isn't as important as how the viewer perceives it.
How does the approach to making these types of quilts differ from a more traditional one?
Well, other than often being smaller, I don't have to follow a pattern or a strict set of construction rules. Seam allowance rarely matters, and I can develop the design more organically. Designing a quilt from start to finish before making it feels as if I'm making the quilt twice. I like the freedom to change direction midway through, at any moment, and being surprised by the finished work.
Do traditional quilters appreciate your fun work?
A lot of traditional quilters send me their quilt tops to finish for them (which is something I do seven days a week), since I have the skills to finish traditional quilts, but I can't say that all of them enjoy my personal work. There are certainly some who do love seeing what I create in the evenings. However, traditional quilt shows are another animal altogether. When I made traditional quilts, I was able to get a few quilts into some major shows. My newer works don't really have a place in those shows. When they're rejected across the board, it's not that they aren't constructed beautifully; it's more than they don't fit into those shows. A lot of "misfit quilters" find themselves seeking rogue shows around the country, in smaller venues, and I find the crowds there to be more receptive to a unique experience. These can be furniture stores, coffee shops, and, most recently, a music venue in Duluth, Minn.
You live in Orlando and have created quilts to honor the victims of the Pulse shooting. Can you describe a little bit about that project?
In the past six months, since the shooting, the Orlando Modern Quilt Guild has organized a massive quilt drive to bring a bit of comfort to those affected by the tragedy. At first, we wanted to be able to create a hundred or so quilts. Other guilds and individuals from all 50 states (and 23 countries) rallied to send us finished quilts, quilt tops, individual blocks, fabric, and funds. Many companies were very generous and donated fabrics, batting, thread, custom labels, and cards. To date, we have collected over 1,700 quilts, and are in the finishing up the distribution to victims, families, first responders, police, firemen, SWAT, K9 officers, 911 operators, doctors, nurses, and Pulse employees. It's been a Herculean effort, and a tremendously moving experience.
Are there interesting quilt subjects you're planning to do?
I have a couple of pieces based on Frida Kahlo coming up, and there's an ever-evolving notebook of unusual ideas; a few certain to shock (possibly offend), and always entertain. I'm sure with the shifting political climate, there will be some big ideas working their way under my needle.