Ravelry and the Olympics — What Can We Learn? 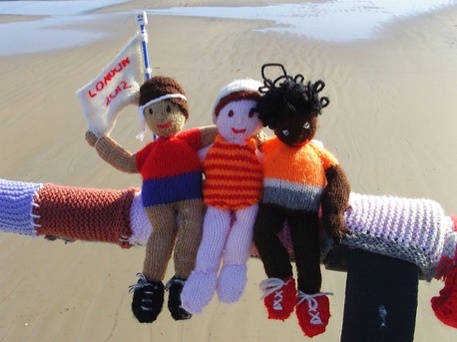 CraftFoxes recently got the chance to chat with crochet expert and blogger Laurie Wheeler in response to the recent controversy regarding fiber artists and the Olympics.

In June, the U.S. Olympic Committee sent a written request to Ravelry.com to change the name of the site's "Ravelympics," an online event for knitters and crocheters. The letter stated: We believe using the name “Ravelympics” for a competition that involves an afghan marathon, scarf hockey and sweater triathlon, among others, tends to denigrate the true nature of the Olympic Games. In a sense, it is disrespectful to our country’s finest athletes and fails to recognize or appreciate their hard work.
CraftFoxes visited Ravely's forum today, and the comments on the U.S. Olympic Committee's letter spans 92 pages. In an eloquent address to the powers that be, Laurie Wheeler responded with her blog post, An Open Letter to the U.S. Olympic Committee. She shares with us what's happened since she wrote the letter, as well as lessons we can take away. 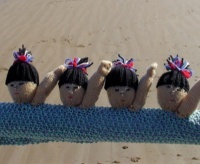 Laurie, have you received any response from the U.S. Olympics Committee in reference to your letter?
Yes, I actually was responded to on Twitter by Peter Sandusky (or someone tweeting as him) who is the spokesperson for the USOC. When I pointed out that form letters should not be editorialized his response was “it wasn’t supposed to be.” But as far as official communication, I got a canned response to a second letter I wrote and emailed directly to the USOC asking for an apology and retraction for the condescending editorial commentary in their notice to Ravelry. The response was pointing out the link to their apology; neither the first nor the second impressed me.
How have you felt about the support of other creators displayed in the comments to your blog post?
It was really amazing to have so many people comment about how they felt regarding the situation. Writing blog posts like that on the CLF site isn’t an uncommon occurrence by me; my crochet fans are used to my being outspoken and addressing sociological/cultural issues surrounding what we do. I felt it was important to address the issue of “traditional feminine handcrafts” in general because the letter by the USOC didn’t single out one craft. It’s always satisfying to know when you have reached people’s hearts and unexpressed feelings.
What do you think that we as a community of creators can glean from all of this?
That is a huge question, and I have several responses to this.
1) I think that it is important for the handmade community to take stock of what they could accomplish as far as collective action is concerned. Yes, we managed to rally many thousands of people into action to defend our integrity and value as makers, designers and cultural stewards. That being said, imagine if we were to use that same energy to support each other economically? I think we have a great opportunity to network, support designers, makers, authors, publishers and independent businesses associated with handmade.
2) Understand that you cannot use registered trademarked or copyrighted materials without permission. I think that is an area that many makers need to understand. It’s not about whether handcrafts are good enough. It is about intellectual property rights. My objection to the USOC letter had nothing to do with their legitimate claim to protecting their trademark.

3) Lastly, but not least, it is important to recognize the value inherent to what we do as crafters and artisans. What we do is productive and creative in a way that offers tangible value to society at large. What we do produces physical, useful, creative expressions of our humanity. What we do is the most fundamental of positive human behaviors, we have thumbs and we know how to use them. What we do is not destructive, abusive or dominance based; it is part of history that often gets overlooked because of its “daily life” nature. Yet, go to any archaeological dig that isn’t a former battlefield and it is that kind of artifact that tells the most about a culture. From pots and cooking implements, to furniture and jewelry, to the toys and carvings made for children or worship. This means that as makers, artists, teachers, writers and purveyors of handmade goods, we are the stewards of our culture and that is something for which we should be proud.

Laurie A. Wheeler is a lifelong crochet enthusiast as well as an author, blogger, marketing and personal growth instructor. She is founder of the membership service CLF 3.0 and the crochet social network Hookey and is dedicated to helping creative people fulfill their visions both on- and off-line.