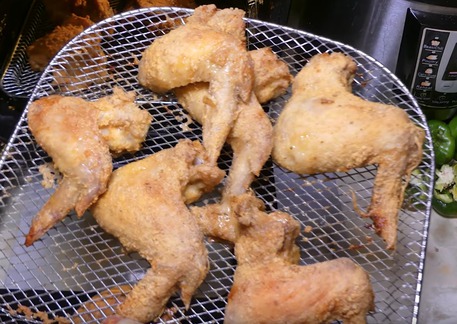 Air Fryers were invented about 15 years ago, but home cooks didn’t take to the countertop cookers until relatively recently. The name “air fryer” is actually a bit misleading. Inside each unit, high power fans swirl hot air around the food, making the cooking method closer to convection baking or roasting than deep frying.

Why has air frying become so popular over the last few years? The new-ish approach has several advantages on deep frying or microwaving food. 1) Healthier: air fryers can use about 70 percent less oil to get similar results. 2) Speed: Convection air cooks food much faster than the traditional roasting. 3) Flavor: For cooks who often use a microwave to heat frozen food or leftovers, air frying is a worthy alternative.
While the roasting method may not be quite as fast as radioactive waves, it usually makes the food crisper and encourages more caramelization (which typically means more flavor). All that said, home cooks who want food out of an air fryer to taste like it was cooked in several inches of oil will need to remember a few tips, several which are listed below along with how-to videos and recipes.
Sill looking for an air fryer? Check out the Power Air Fryer Oven endorsed by Emeril Lagasse.
Everyday Joe has 10 cooking tips for using an air fryer oven. Five of them really stand out. For the other five, watch the video.
Reduce Cooking Time and Temperature
A big plus of using an air fryer is that you can reduce the cooking time of recipe that uses a traditional oven. While its smart to check the air fryer instructions, you can generally reduce the recipe oven temperature by 10 to 20 percent and decrease the time by 40 percent.
Get an Oil Mister
Don’t assume an air fryer will give you the thick crust and rich that normally comes with deep frying without some oil. Yes, you’ll use a lot less oil over all, but you still need to coat the food in a thin layer of it. Many experienced air fryer cooks advise misting the food with oil as well as oiling the racks. You may not wind up with exactly the same thick crust as you would get from deep frying, but you can get impressively close.
Steam Vegetables En Papillote
You can do more than roast or fry things in an air fryer. The traditional french method of cooking en papillote (in paper) can be accomplished in an air fryer by wrapping fish or vegetables in parchment paper or tinfoil with a little bit of water. Just be mindful to adjust the time and temperature of an en papillote recipe as necessary and keep an eye on the food since it will likely steam quickly.
Rotate racks
Even though an air fryer blows heat around the food to cook it, you may want to rotate the food racks to get all of the food cooked evenly. Placement of the food on the rack and in the oven can often impact how much hot air gets to each piece of food. Of course the racks will be hot so be careful when moving them around.
Reheat Leftovers
If you’re a fan of tossing a slice of last night’s pizza into the microwave, try to reheat it in an air fryer. The result will likely be less chewy and crisper than what you get in a microwave.

If you’re a fan of deep fried food, fried chicken will likely be one of the first things you try to make in an fryer. Youtube host 'Tech in the Bathroom" (try to forget the handle) demonstrates how to season, batter and then place chicken pieces on the racks to properly cook in the air fryer. To ensure the chicken has a satisfying crust he sprays coconut oil on the piece before the baking starts.

Not all of the food you make in the Air Fryer is going to be battered. In James’ video, he demonstrates a simple, light preparation for lemon-pepper fish, basting salmon fillets with oil and then topping with a sprinkle of lemon-pepper seasoning mix.

Be warned: Although air fryers are great for a lot of things, but baked goods can definitely be a challenge. The intense heat leads to a crush that’s thicker than you may want. Several people have made donuts using air fryers (often using biscuit dough). This recipe for beignets works well in the air fryer.