The Best Christmas Markets in the United States 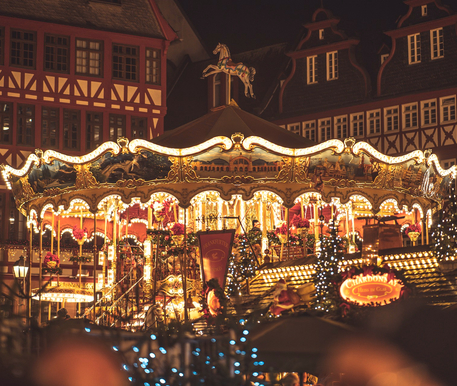 The early Christmas markets weren’t the confab of quaintness they are now. No ornaments, hot cocoa or darling holiday crafts were being offered up in frosted, twinkling stalls in the 14th century. Back then, the archetypical German Christkindlmarkts primarily sold meat. A century or so later, churches encouraged markets to be held nearby to shepherd more people into services. Soon, the houses of worship were competing with peddlers for congregants.

Then some marketing wiz had the idea to promote gift giving during Christmas and the clergy and crafty realized they could collaborate to the benefit of both.
In America, Christmas didn’t really take off as a national holiday until the mid-19th century — and Christmas markets are a relatively recent phenomenon. Mifflinburg, Pennsylvania’s Christkindl claims to be the oldest in the United States, and it only started in 1989. Every year, Germany hosts almost 3,000 bazaars filled with holiday huts. U.S. Christmas has a lot of catching up to do. Here are some of the best markets in various regions of America.

Inspired by Nuremberg’s 16th century Christkindmarkt, Chicago’s event of the same name began in 1996. It’s so packed with vendors and people, it can take 2 to 3 hours to really soak in the whole experience. There’s Christkindmarkt story time for the kids and gluhwein for adults. The menu includes sausages, sauerkraut, potato pancakes, schnitzel and other saxon fare. If mugs and beer stein’s are your thing, numerous types are on sale, including commemorative ones. Of course Christkindmarkt also has handmade crafts - handprinted glass ornaments, handcarved nativity scenes, nesting dolls and plenty of other German and slavic decor.
Just getting into the main ornament shop can take 30 minute wait because the items are so distinctive and plenty of people just come to window shop. You can also find some of the most “amazing hot chocolate you’ll have in your life” according to some Yelp reviews. The Kinder Club for children arranges events such as scavenger hunts. Several days feature performances by oompah bands and folk musicians. The event is open to the public and is free to attend, making it the perfect market to enjoy yourself without breaking the bank — however, your waistline is another story!

With a name like Bethlehem, it’s no surprise this Pennsylvania town has rechristened itself “Christmas City USA.” Bethlehem used to be nationally known for its steel and the market is now held on the site of the old SteelStacks, which is also the location of the National Museum of Industrial History. It’s safe to say no other Christmas market has such a steampunk setting.
Given that Pennsylvania has a large number of German Dutch settlers (or, actually, descendants of them), you can count on the treats and crafts to be very authentic. The handmade items go beyond what you might expect to see at a Christmas Market, like nutcrackers, to include handbags, baskets, soaps, teas, candles, jewelry and even bathroom interiors. Outside there are fire pits to keep you warm during the cold season. While you’re in town, you’ll also have access to some of the best restaurants in Bethlehem, PA, including Social Still, a distillery and restaurant set in side of prohibition-era bank building and the Bookstore Speakeasy, which recreates a Jazz Age nightclub with 1920s-style ambiance and live jazz.

While there are several Christmas markets in the Big Apple, one that really stands out is located in Union Square — and it’s officially known as the Holiday Market. This collection of shops is less like an old world European fair and more like Etsy come to life.
Yes, you can find bratwurst and wine if you look for it, but there are also numerous food trucks such as Waffles and Dingles, and Korean Dog (Korean spiced hot dogs) plus other vendors offering Bao and Poutine. Much like New York City, the flavors of the food and crafts here are pretty international. The stocking stuffers sold here include handmade clothing, soaps, perfumes and jewelry. For crafters who sell mid to high end products with a good margin, it’s an excellent place to set up shop since you’re almost guaranteed to get foot traffic.

Once a western frontier boomtown, Leavenworth, Washington, got hit hard by the stock market crash of 1929 and the rerouting of the nearby railroad. In order to save the economy, local community leaders asked the University of Washington Bureau of Community Development for ideas. In 1965, the collaborators agreed to take advantage of the Leavenworth’s green, mountainous surroundings and turn the town into a Bavarian village.
Throughout the year, travelers come to Leavenworth for a taste of the Alpine life in the great northwest. Is it any surprise that a Bavarian village hosts a Christkindlemarkt? The town is halfway to a Christmas market all year round. Held over Thanksgiving weekend, Friday and Saturday nights both feature a welcoming ceremony in which the Chriskind (a golden angel of sorts) parades down the main street along with local dignitaries and Mr. and Mrs. Claus. If you want German food, there are numerous restaurants serving it, including Munchen Haus, Leavenworth Sausage Garden and Rudloof’s Pizza and Brats. Be ready for plenty of cuckoo clocks, lederhosen and Oktoberfest music.

While the Longhorn state isn’t exactly a winter wonderland, it has had quite a few German settlers over the years. These days at least two million Texans boast of some German heritage.
The Texas Christkindl Market is known for its impressive light displays, handmade crafts and special event featuring the Elf on a Shelf. Compared with other markets, it’s relatively small, but boasts a skating rink. The Texas event includes several child-friendly activities such as a petting zoo and a puppet show.
Since they had to scale back in 2021 for the pandemic, it’s good to check that everything is fully operational before attending.
American cities are increasingly getting in on the Christmas market action, and the options on the list are no different. Whether you're looking for culture, drink, food, or just the feeling of being, any of the cities mentioned in this post will get you fully immersed in the Christmas spirit
Rate this post 0.0 rating Report post