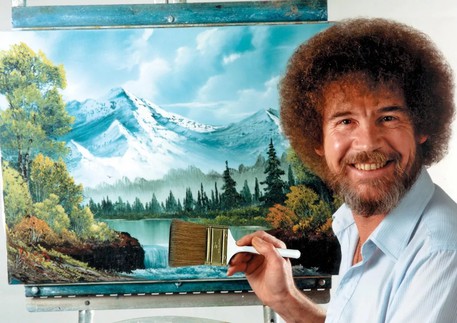 These days, budding artists take many different paths to learn painting techniques. You probably picked up a few concepts sloshing watercolor onto paper in kindergarten. Some brush wielders stick with the pursuit well into their postgraduate years to get a master of fine arts. There may still even be some smoking misanthropes who spend all day throwing colors at canvases in loft studios on their way to bohemian hall of fame.

In the internet age, many excellent artists and schools have created online painting courses. If you want to see a list of in-depth oil painting tutorials taught by professionals, click here. Some of these classes even send you the supplies you need to complete the assignments. (You probably guessed, they aren’t free.)
Other readers who just want to dabble in painting, pick a few tips and purchase their own supplies, can peck around Youtube for instructors. The old school pastime is surprisingly popular on the worldwide web's video library. Several of the creators listed below have racked up millions of views and hundreds of thousands of subscribers.
These influencers come in many flavors: Some teach traditional landscape painting techniques, others take inspiration from the world of animation. Check below for several people who want to inspire you to get started painting.

William Kemp’s “Beginners Acrylic Painting Course” has over four million views, demonstrating that there are quite a few hobbyists around the globe who long to pick up a paintbrush.

The first video is an introduction to his seven-lesson series, which includes lectures about planning, materials, techniques, shading and more. His videos focus on working with acrylics, and there are several additional series that delve into subtopics such as color mixing and still life images.

Want to focus on oil paints instead of acrylics? Kevin Hill has you covered. (He covers acrylics as well, if you’re interested.)

Hill's serene voice almost seems like ASMR it’s so soothing. Hopefully that will encourage you to stick with his project videos, which lean heavily into landscapes such as “Peaceful Autumn Forest,” “Sunlight Through the Orchard” and “Stormy Coastline.”
In “Canadian Waterfall” (embedded above), Hill explains how to paint from a photo. Like Bob Ross, Hill is a bit of a storyteller who makes his videos nice and relaxing to watch, even if don’t feel like picking up a brush.

If you’re looking for an approach to painting beyond traditional landscapes and still lifes, check out Aaron Blaise’s channel. As an animator for Disney, he worked on movies such as “The Lion King,” “Beauty and the Beast” and “Mulan.” He’s also traveled the world and painted animals from real life.

Unlike some of the other channels, he doesn’t just drill down on one technique or medium. He pulls from decades of experience to share interesting and clever tips. One video may be about watercolor painting, another is about drawing a leopard with markers and the next about digital painting.
There are videos on oil painting, but it’s likely fans of drawing and animation will find the most to love here. Blaise’s channel features time lapses that show his creation of characters like “The Hulk,” “Batman” and “The Creature from the Black Lagoon.” Several live videos demonstrate animation techniques that went into making “Beauty and the Beast” and characters from “Mulan.”

Artist Jazza John is popular on Youtube for good reason. His painting videos go well beyond technique to bring in more than just art fans. Consider some of the challenges he tackles: painting fake Pokemon trading cards, making an animated movie in 24 hours, drawing pretty and ugly character mashups.

Will you learn tips and techniques from these video topics? Possibly. Will they be a lot of fun to watch? Definitely. For example, the video about making fake Pokemon trading cards analyzes the art styles used on the cards and then follows along in the brand's established approach. Almost any commercial artist will need to know how to mimic established art styles to complete a professional job, but that’s not the stated lesson of Jazza’s video. Jazza suggests he’s creating illicit forgeries when it’s likely that most of the artists who created the videos would be flattered that he shined such a light on their oft-overlooked artwork.

Mark Waller’s channel name is fairly self-explanatory: ExploreAcrylics. A professional teacher for over 20 years, he goes beyond the basics to show viewers tips on creating a great workspace, buying the right brushes, setting up a palette and easel as well as choosing the right paint. He also covers topics such as color theory and composition.

Waller’s relaxed style makes it easy to understand the lessons. One of the nice aspects of the videos is that several of them offer viewers a chance to paint along with him.

No discussion of painting videos would be complete without a mention of Bob Ross and his hair-raising disco ball perm. For over 30 seasons, Ross ruled the airwaves, 11 of which were on PBS.

His oil painting approach is known as "wet-on-wet" — painting a new layer color over a thin layer of wet paint. For many, Mr. Ross' videos are as much as taking a visual Xanax as they are about learning to paint. His explanation of landscape painting are delivered with a smooth as aged bourbon voice that gently lulls the listener into a warm, happy place.
For those who think Ross’ Youtube channel is just a click down memory lane (Ross died in 1995), there are new lessons about "Keeping The Bob Ross Dream Alive” and “The Joy of Bob Ross: A Happy Little Podcast.”
Rate this post 0.0 rating Report post