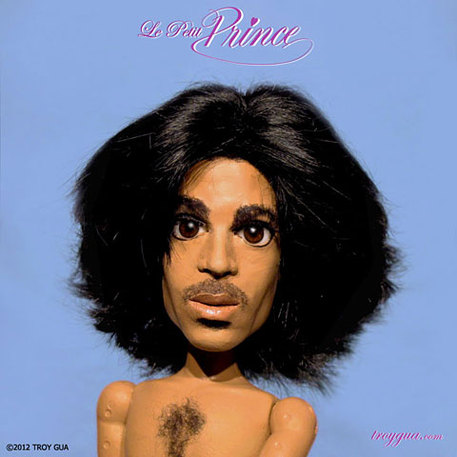 Typically, pop-culture puns are the ingredients of tabloid headlines and trivia-night team names. The Ronald McReagan. The Dada Gaga. The Salvador Dali Lama. When artist Troy Gua spins puns like these, out comes paintings and sculptures.

While he's been working for years and gained a following in his hometown of Seattle, Gua's affectionate polymer clay recreation of the Purple One—Le Petit Prince—has gained a fanbase of its own, including The Roots' drummer Questlove, MTV and New York Magazine. This doll is just one of his many works inspired by a rock or political icons.

Gua is unabashedly preoccupied with fame, an attribute that developed in early childhood. “I grew up in front of the TV, listening to the radio and my brother's LPs, going to movies and fantasizing I was pop star," explains Gua. "There was a long line of pop culture obsessions for me as a kid: Elvis, Elton John, King Tut, Star Wars, the list goes on and on. My mom and sister even sewed an Elton John costume for me for my fourth or fifth Halloween.” 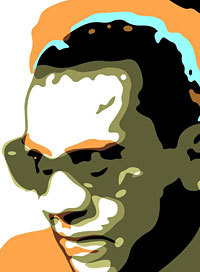 For a long time Gua made surrealist paintings that were so personal that he was uncomfortable selling them. A few years ago he decided to “reboot” his artistic style, taking inspiration from Andy Warhol's use of repetitive imagery.
For the “Pop Hybrids” series, Gua juxtaposes high and pop culture, layering digitally printed portraits on metallic photo paper, mounting them to sintra panels and finishing them with a resin coating. In “The Man Ray Charles, or Sound and Vision,” the heads of Man Ray and Ray Charles meld into a sherbert and pea-green amoeba wearing Ray Bans.
“I'm interested in the concept of overlapping—eras, personalities, philosophies, styles. Everything is overlapped to some degree, in my opinion, so using overlapping appropriated imagery made perfect sense to me.” 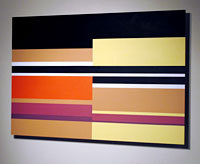 Ernie and Bert as ColorBandz
In the Colorbandz series, Gua stretches faces into horizontal lines, leaving the viewer squinting for recognizable features. These minimalist, abstract works are described by Gua as “portraiture at the speed of technology.”
Still, it's the hyper-realistic work—figurines made at one-sixth life size—that are getting people outside of the art world to take notice of Gua's work. The polymer clay dolls are partially inspired by “Team America: World Police” as well as the movies from the '60s that inspired its creators, Matt Parker and Trey Stone. So far Gua has made polymer versions of himself, his wife, Salvador Dali, Prince and Michael Jackson.

Prince wears Troy
Similar to the other dolls, Gua built Le Petit Prince's head out of Sculpey clay, then added glass doll eyes and a styled wig. The different hairstyles and facial hair are made of cashmere. The clothing, props and sets, depending upon how elaborate, took a few days to make per shoot.
Troy plans to publish a book of the various Petit Prince photo shoots and would happily go into wide-scale production, if a certain Minneapolis denizen were interested. Want to commission your own pint-sized version of yourself? It will cost you four figures, or you can get one of Gua's 11” x 14” original prints for $30.
“I'd love to show this work with large scale photos, vitrines housing the costumes and props, the little dude himself spinning on a record amid swirling lights and smoke, music playing ... Oh, and I'd die to remake 'Purple Rain' with a cast of wee Minneapoli."
Next year, Cleveland's Kenneth Paul Lesko Gallery will be hosting a show of the Pop Hybrids series.
"In the meantime," waxes Gua, "let's see if I can get on Ellen or Jimmy Fallon."