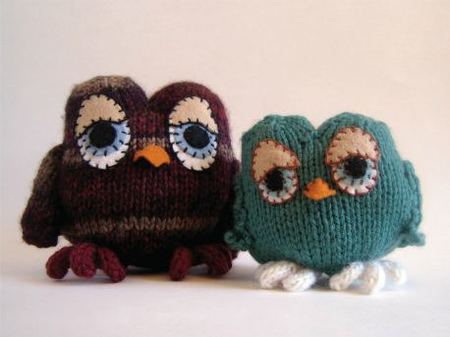 A few years ago, my cat captured a nest of sparrow chicks. In a desperate attempt to save them, I took the entire family to a wildlife refuge and rehab center here in the mountains. While touring the center, one of the vets introduced me to a nest of screech owl hatchlings someone had saved. There they were, three incredibly fluffy little balls of gray feathers with enormous sleepy yellow eyes. I was immediately smitten.

Place first 6 stitches from each eye on a needle. Place the eyes side by side, needles parallel, upside-down like two little cups…or a little bra. Reattach yarn. Take the first stitch from each needle and knit together. Continue to knit together each consecutive stitch. After you finish the row, and have 6 stitches, turn and knit back across the row, binding off as you go. When you have one stitch remaining, carefully pick up the next stitch to the left from the contrasting yarn. Be sure to bind off remaining stitch from the center of the eyes. Pick up and knit each remaining stitch around the perimeter of the owl, distributing them evenly among the needles. When you complete the row, pm, and knit another row in the round. 38 sts.

At this point you will divide the stitches to knit the toes. Put the first 4 stitches from the top needle on a safety pin, and the 4 stitches below on the other needle on another safety pin.

Leave 6 inch tail. Pull yarn through 2 remaining stitches and knot. Using a yarn needle, run tail downward through the stitches along the bottom of the toe. Pull until toe has the desired curve. Knot, and pull into toe.

Pick up the middle two stitches from the top and bottom needles. Follow the directions for the first toe.

Follow directions for first toe with the remaining 4 stitches.

Wings (make 2):
Knit the first and last stitch of every row.

Place the feet in the shape of a V, and sit the body on top. Adjust the position of the feet until they look symmetrical. Use straight pins to secure them in place on the bottom of the owl. Use a yarn needle and the long tail from the foot, sew into the body, parallel to the foot, then through the foot, and down through the body along the other side. Continue this until the foot has been secured to the base of the claw. Repeat for other foot. 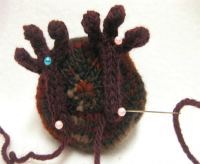 The placement of the wings is optional. They can be secured to the sides flat all the way down, or can be folded in half, to the shape of a triangle, and attached along the side of the body.

From scraps of felt, cut 2 each of: Eyeballs in white, iris, pupils in black, eyelids in beige.

Cut one triangle from orange felt for beak. Cut embroidery floss and using a blanket stitch to attach eyes to head, doing one circle at a time.

For the beak, use a matching color of thread and a ladder stitch to attach between eyes.