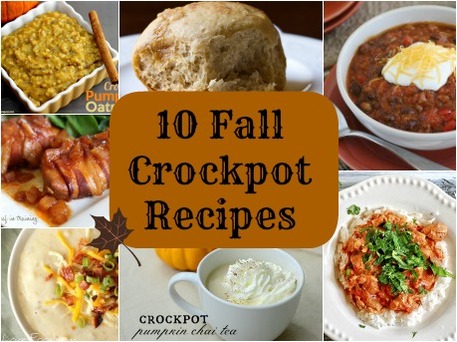 Pin It
When I first met her, one of my dear friends in Seattle did not own a crock-pot. She believed she didn't need a crock-pot. (Insert '90s sitcom laugh track here.) I am of the opinion that everyone needs a crock-pot. In the summer, a crock-pot helps keep your house cool by eliminating the need to use the oven, and there are glorious soups, fruit butters, and kid-friendly crock-pot recipes for every other season.
The crock-pot is also every multi-tasker's silver bullet. All it takes is tossing ingredients into the crock-pot in the morning, and when you return from a hard day's work, your house smells like Martha Stewart broke into your house while you were away, like some culinary mastermind version of Santa or the Tooth Fairy. (I mean, really, how could you be mad?) Imagine the succulent roast chicken, fluffy dinner rolls, and spiced winter cocktails waiting for you—each in a crock-pot.
In case you were wondering, my friend now owns a crock-pot. And, like most crock-pot devotees, she can't imagine a kitchen without one. 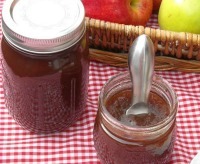 This fall crock-pot recipe can be distributed into Mason jars and given away as gifts, with a cute little homemade label and a loving note. Apple butter goes nicely on toast, English muffins, creative sandwiches and beyond. The hardest part of the apple butter endeavor is the canning, but that's more of a statement about how easy the recipe is. With a simple ingredient list and sixteen hours, the result is a ton of delicious apple butter!
Mommy's Kitchen has the instructions 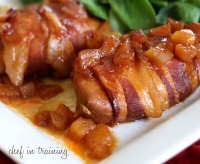 When I made this fall crock-pot recipe, I was very concerned about the texture of the bacon. I thought it would turn out rubbery and slimy, but I was pleasantly surprised. The bacon sitting directly below the chicken was not as crisp, but overall I was very pleased by the texture. The combination of honey barbeque and apples makes this dish very sweet and absolutely delicious. I recommend pulling out the slow cooker for this one as soon as possible.
To get the recipe, visit Chef-in-Training 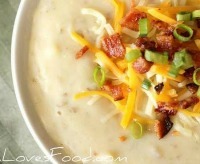 Nothing says "comfort food" like a loaded baked potato, and this fall crock-pot recipe combines the flavors of a giant baked potato into a delicious and satisfying soup. For the full experience, don't skimp on the garnishing touches, like bacon and scallions. Yum!
For the full recipe, visit Key Ingredient 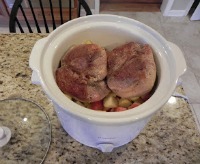 Fall is great in terms of fresh fruits and vegetables, and this fall crock-pot recipe uses some of the season's bounty. Fresh apples and pears, along with apple cider and fall spices, make this dish a sweet and savory slow cooking dream.
Chester County Mom's has the recipe 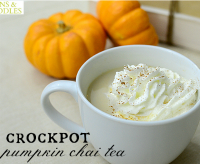 Deliciously unexpected and perfect for a crowd, this fall crock-pot recipe has winner written all over it. Pumpkin chai tea is perfect for fall, where pumpkin rules and tea beckons. This recipe can be ready in just over two hours, and, of course, it stays warm for hours in the appliance to rule them all: the crock-pot.
Barns and Noodles has the recipe 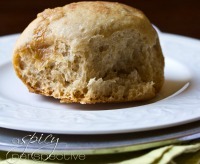 I love that this fall crock-pot recipe cooks deliciously moist bread in a place other than the oven. Warm bread is the best side known to man, but the oven can get crowded, so having the bread regulated to the crockpot works well for me. Pro tip: the recipe states that the rolls need to be baked in three batches, but unless the bread is supposed to feed a football team, I'd freeze two-thirds of the dough for another scrumptious future episode of Best Side Dish Ever.
A Spicy Perspective has the recipe 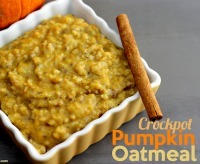 I would totally get out of bed for a bowl of this amazing fall crock-pot recipe. Pumpkin oatmeal, thrown together in fifteen minutes and ready for consumption as soon as the alarm sounds, what's not to love?
Head over to Wanna Bite? for the recipe 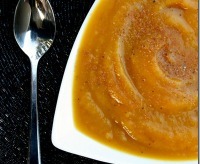 A vegan fall crock-pot recipe, this butternut squash and apple soup can win over almost any carnivore with its velvety texture and comforting fall flavors. Be sure to pick up some butternut squash and fresh apples at the local farmer's market to make this soup extra special!
Clean-Eating Chelsey has the tutorial on how to make it

There's nothing particularly "fall" about this crock-pot recipe, but I would be remiss if I made a slow cooker recipe roundup that didn't include one of my all-time favorite dinners. I made this embarrassingly often when I was pregnant with my daughter. Seriously, at least four times, and this recipe comes with a lot of leftovers, even while I was eating for two (and then some). Cheaper than going out, this recipe is amazing for the wallet and the tastebuds (not so much for the waistline, but everything in moderation).
Find out how to make this little piece of heaven from Tasty Kitchen 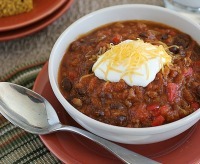 Football season is chili season, and this fall crock-pot recipe puts a pumpkin spin on the signature fall dish. Honestly, I thought that the pumpkin would be overwhelming and weird, but it's more of a seasoning than a feature. Don't get me wrong, you know pumpkin is in there, but it makes the chili complex and rich and super filling, rather than reminiscent of a spicy pumpkin pie. It's definitely worth a try, particularly because it's so simple.
Find this fall crockpot recipe at Taste and Tell

Do you love to cook new recipes, bake appetizing desserts or whip up healthy snacks for your family? Snap a pic of your most delicious kitchen creation and upload it as a project at CraftFoxes! We’ll pick our favorites from each week to feature, and we’ll be back next Tuesday with more appetizing inspirations.