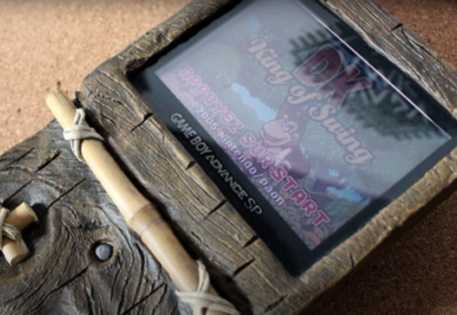 Gamers and crafters don’t exactly seem like the kind of people who would party together. One type makes sweaters; the other kills aliens. But they both build their own worlds. One works with hammers and yarn to make shelves and scarves and the latter uses a controller to architect player profiles and moon bases.

Now if you’re a crafter who wants to build out some home improvement projects or gifts, there are a lot of fun ways to create the coolest gaming cave. Below are a handful of ideas big and small to make for your favorite gamer, whether they’re a hardcore console player or casual phone time waster.

Anyone who loves medieval castles or even Scooby Doo will dig the idea of a door that opens up to a secret room. Anyone can have their Xbox on the coffee table, but to have your own secret gaming lair heightens the whole experience.

To make build a room hidden behind a bookcase, VanDam Construction knocked out the existing door, increased the size of the frame and replaced the door with a bookcase on wheels that would hide the space. This could be particularly fun for an online card player who wants his own personal space to focus. (Need to find an online casino? Check out read some reviews at Maple Casino.)

If you have a secret lair, you’ll probably need to outfit with a bar cart. HomeMade Modern shows how to make a one out of oak wood and 1/2-inch piping. You’ll need a miter saw, orbital sander and router as well as a decent bit of woodworking knowhow. The finished product has rustic, manly style.

Sure, a lot of gaming consoles look sleek on your coffee table, but are they conversation pieces?

Feast your eyes on some of the most crafty modded consoles ever carved, welded or glued together. Mark Haggett made a table with an N64 embedded in it. Vadu Ama turned an NES into an ode to Castlevania. Edward Zarick developed an R2D2 themed laptop with a PS4 inside of it so you can take your games just about everywhere. Zarick actually gives away designs for many of his mods at his site Ed’s Junk.

Phone Case Made from Plastic Waste

Not every player needs a secret hideout. For some casual gamers, a cell phone and chair will do. For those who want a distinctive phone case, you can make one from an old plastic bucket. After cutting out a sheet of plastic just larger than the phone, use a heat gun to curl up the corners. An Xacto knife can be used for cutting out spaces for the buttons.

Not every gamer needs electronics. For those who like to kick it really ol' school, there's the Rubik's Cube. If you have a lot of patience and excellent paper cutting skills, you can make an all-paper Rubik's Cube. It makes a nice break from playing too many video games.