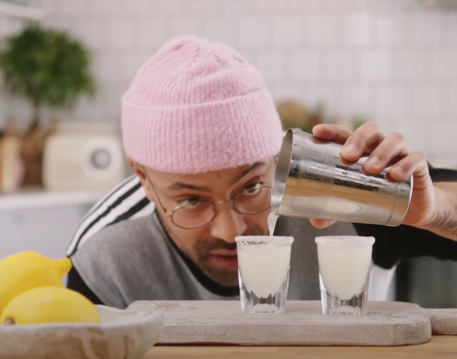 Mixing a great cocktail seems like one of those life skills you’re supposed to learn along the way, at post-grad barbecues and late night beer pong sessions. In reality, it’s like being a charming party guest — everyone thinks they know how to do it, but no one is really sure. And if part of being a charming party guest means being able to mix cocktails on the spot, then you have come to the right post.

You do not need wet bar stocked with bitters and absinthe to put together a smooth glass of hooch. But you will need to stock up on alcohol. Given that this article is sponsored by Absolut, you probably know where this conversation is headed. They do make cool bottles and fun drink videos, so we’re partying with them tonight. Plus, these easy cocktail ideas often come together quickly with one of their flavored options.

Given that people are still going gaga over “Friends” and scrunchies, another bit of 90s nostalgia, the lemon drop shot, should be a part of your quick drink repertoire. A mix of sugar syrup, fresh lemon juice, ice and citron vodka, the fun starts when you can rock it all together in a shaker (while also doing a Tom Cruise “Cocktail” impersonation). Don’t forget to garnish with a lemon wedge. Absolut Drinks has a straightforward and delectable recipe.

You would think the recipe for gin and tonic is pretty much in the name, but it’s a little more complicated than that. If you have the time to chill a highball glass or two in advance, it will make it seem like you know what you’re doing (and soon you will). Fill the chilled glass with ice cubes, 1 part gin and then top up with tonic water. For the appropriate level of snazz, garnish with a lime or lemon wedge. Don’t be afraid to give the wedge a squeeze before dropping it in the glass.

Fun fact: The vodka gimlet became popular in the United States during prohibition because the lime flavor hid the flavor of alcohol. But how bad were those prohibition-era cops that they would walk into a room filled with people swilling vodka gimlets and think: “Just a bunch of lime water sippers, nothing to see here.” Fill a rocks glass with ice, two parts vodka, one part lime cordial, and a lime wedge garnish. Like the lemon drop, you can also break out the cocktail mixer for this recipe.

The basic shandy recipe is half-and-half beer and lemonade, but there are variations of that, as well as more strict rules about how to make it depending on what country you're in and what name the drink is known by. The above video recommends a combination of ale and ginger ale. At least the recipe is easy to remember when you’re at the store.

This twist on the classic Negroni has three ingredients in equal parts, making it easy to mix, and is a great introduction to the the unique, pleasurable, and increasingly popular flavor of mezcal. Combine the smoky liquor with Campari and sweet vermouth, stir with ice to get it thoroughly chilled, and garnish with a sliver of orange to achieve a cool temperature and warm, inviting appearance.
Rate this post 0.0 rating Report post