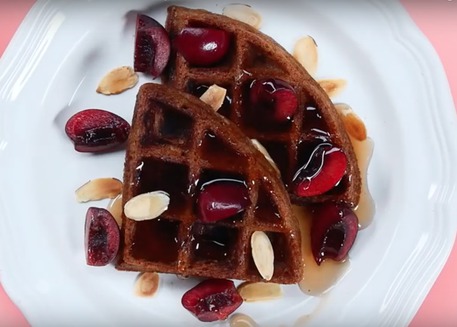 Have a hankering for chocolate chip waffles? You've come to the right place. There are many inventive recipes for pressing chocolate chip batter between hot metal plates and serving the resulting dimpled goodness on your brunch plate. You can try Plant-Powered Haile's Vegan Banana Chip, GourmetTV's double chocolate chip, or the work of Poor Man's Gourmet Kitchen -- Oreo waffles. Granted, Oreo isn't traditional chocolate chip, but it's a very similar concept. You'll see. Now get ready to bake up one of the most energy-packed mornings ever.

HamptonCreek's chocolate chip waffle is healthier than most recipes, but still has a distinct flavor. Starting with Hampton Creek's chocolate chip cookie dough and then mixing in almond milk and almond butter, the result has much more protein than the standard waffle, plus candied cherries.

Staying with the vegan approach for one more recipe, Plant-Powered Haile goes hardcore into the vegan ingredients. First she curdles the almond milk with apple cider vinegar and then adds agave, coconut oil, flour, baking powder, salt, cinnamon, vegan chocolate chips and a banana. Chances are you'll need to make a shopping trip for at least one of these ingredients before starting.

Byron Talbott's waffles are so old world reverent that the recipe includes dry yeast and the batter must be proofed before making. The rest of the ingredients are what you might expect: whole milk, egg, flour, vanilla and dark chocolate. For those who want a fluffy old world waffle this is an excellent choice.

Mama Dee proves there are many ways to make a waffle, including used a box cake mix. Sure, there's also an egg, some milk and vegetable oil. What really makes it distinctive is the peppermint extract and green food coloring in addition to the chocolate chips. The approach can also be applied to almost any of the other chocolate chip recipes. Could be a favorite around St. Patrick's Day as well.

For those who don't think chocolate chip waffles are quite chocolatey enough, there's Le GourmetTV's Chocolate Chocolate Chip Waffles. Along with the flour, baking soda and baking powder, the dry ingredients also include cocoa powder. Plus the wet ingredients have buttermilk and a couple more eggs than most other waffles. With a handful of chocolate chips you're in for an extra rich treat.

All niceties aside, the Oreo Waffle is an experiment to see how much sugar you can pound at breakfast without mom finding out. True, there are no chocolate chips in the recipe from Poor Man's Gourmet Kitchen, but it's arguable to posit the chips of cookie are chocolate, ergo, it's a chocolate chip waffle. Not only do these waffles include crumbled cookies in them, but the recipe also calls for two waffle sections to be sandwiched together with vanilla frosting as the filling. Let's just say if you finish brunch and then start manically running up and down the street as if in throes of 'roid rage, you've been warned. Bon Appetit!
Rate this post 0.0 rating Report post