How Crafting Saved My Life 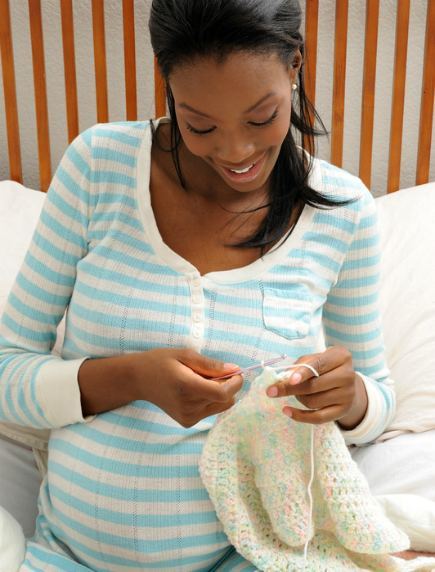 I’ve never been good at sitting still. For ten years, my job as a traveling salesperson required me to spend more time in airports than in my apartment. Outside of work, my social life was equally busy, and I enthusiastically welcomed the demands on my time, thriving when I was at my busiest. Back then, I had no idea how much I took my carefree existence for granted, but life was preparing to teach me a lesson.

When I learned I was pregnant with my first child, I thought I might have to slow down a bit, but I was looking forward to nine blissful months of ice cream, trendy maternity clothes and prenatal yoga. The reality, however, was much less glamorous. In fact, it was downright miserable. Just as my husband and I were preparing to share our good news with friends and family, we both lost our jobs. Rather than bask in the excitement of preparing for our new arrival, I obsessed about how we would afford diapers and bottles for our baby.

After lots of tears and sleepless nights, I resolved to find a bright side to our employment situation. That is, until my doctor discovered a complication with my pregnancy and sentenced me to five months of bed rest. This meant I would have to give up walking, yoga and everything else I’d hoped would help me forget about the stress of being out of work. The glimmer of optimism I'd had quickly turned into overwhelming despair. I thought about all of the bad things I’d done in my life, trying to figure out what could have been horrible enough for me to deserve such an awful fate. There couldn’t be any other explanation for this wave of misfortune.

Lots of family members rallied around to help bring me out of my funk, but it was my mother who suggested the unthinkable — why not use my free time to cultivate a creative hobby? Her suggestion was based on her own experience with scrapbooking — the one thing that helped her cope with her divorce from my father. She found it comforting to channel her energy into a creative project, and thought I could benefit from something similar.

Skeptical that any form of crafting would help me forget how miserable I was, I reluctantly decided to give knitting a try. I’d always considered it a skill that I should have before becoming a grandmother, so I figured it wouldn’t hurt to get a head start. My mother sent me an I Taught Myself Knitting kit, along with a generous supply of yarn to get me started.

After a week of dropped stitches and finger cramps, I found that knitting picked up where yoga left off, creating a soothing environment for me to forget about the pressure of finding a job or carrying a baby to term. I didn’t have to think about NICUs or steroid shots, I simply got lost in the monotony of the stitches.

My first project made me more determined than ever to make sure my baby was healthy. I wasn’t doing all of this knitting and purling for nothing; my daughter was going to get some serious use out of the blanket I had been making for her.

Now that my daughter is a happy, healthy 16-month-old, those days I spent in bed seem like a distant memory. I’ve accepted that my life will never be the same as it was two years ago and I’m learning to be comfortable with staying put more often.

And every time I get down, I still pick up my needles.