How to Make Your First Quilt — Finishing the Quilt 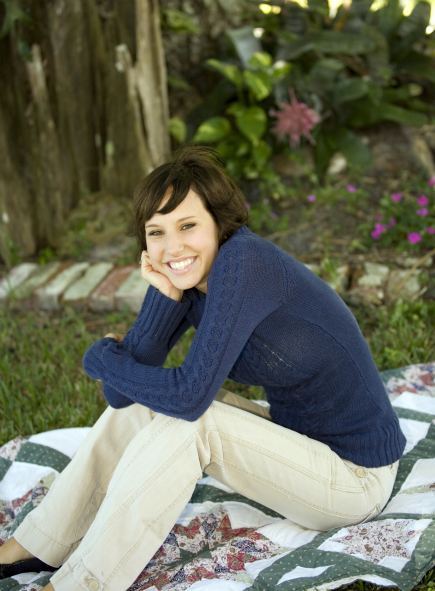 If you've been following along with us, you'll have gotten some basics choosing quilt fabric as well as inside tips for sewing your quilt. But now comes the final step: binding. Dun, dun, dun ... 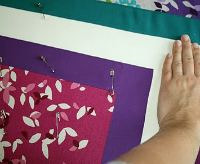 chasingcottons.blogspot.com
Basting, and We Don't Mean the Turkey

We go from sandwiching to basting ... pretty soon this quilting tutorial will become a brunch how-to! Now you are going to either pin or baste the three layers together so that when you quilt (with a sewing machine or by hand — your choice), the layers will stay in place.

To baste, which is creating a temporary seam via an unknotted thread, place the threaded needle in the middle of your quilt and sew large stitches towards each corner. Then baste down each column and then across each row. Reloading the thread rather than use impossibly long strands will prevent tangling.

If you want to pin the quilt, a faster alternative to basting, Cox writes in her book to follow the same pattern (create an X, pin vertically and then horizontally) but attach safety pins every 3 to 4 inches instead of basting. Starting from the center is important, Cox writes, because it keeps the layers smooth and stable.
Get a photo tutorial from Chasing Cottons about how to baste a quilt using safety pins. 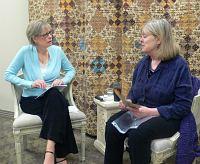 Meg Cox
Is One Better Than the Other? Machine-Quilting Versus Tying

Quilting is nothing more than joining layers of fabric together, and there are two main ways to do it, via machine or by hand. Not sure which one is yours? Read on.

Many quilters view machine-quilting as the box cake mix of the sewing world: i.e, cheater, cheater, fake pumpkin-bread eater. But this is an outdated opinion, one often expressed by older generations. Cox says, “It's nice to know how to do both. It's whatever your situation, your level of benefaction.”

If you don't want to make friends with the sewing machine, then Cox says there is nothing wrong with hand sewing. Quilters “can tie the quilt instead of machine quilting, and they can get it done in less than an hour.” Tying a quilt means sewing small knots with embroidery thread throughout the middle of the quilt — a bit like toothpicks in a melty, bacony club sandwich.

The major benefits of machine quilting? It's faster and creates quilts that are more durable, a necessity for heavy-use creations like bedspreads. But if creating large projects — like that heavy-use blanket — you will have to work out how to sew with lots of fabric pooling around you.
Check out this photo tutorial from The Purl Bee that compares the process of hand-quilting to machine-quilting to decide which one works better for you. 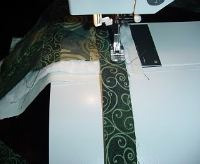 gratzindustries.blogspot.com
Are We There Yet? Binding the Quilt

Using a Double-Fold Binding If quilting is like climbing Mt. Everest, then adding binding is that last stretch where it's just you and the Sherpa. Binding, which is nothing more than sewing fabric strips to fashion tidy edges, is complicated in theory but easy in practice.

Cox prefers bias binding, which means that the fabric strips are cut at an angle to the grain rather than straight. Think of cutting a piece of wood with the grain and then at a 45 degree angle. To make the strips, Cox writes in her book that quilters should first cut fabric into squares. (You can do this by making a triangle and then cutting off any extra.)

You can choose to attach the bindings by hand or machine, both work well.

While it sounds a bit complicated, it's actually rather simple and, to Cox, even therapeutic. She says, “I like to do bindings. It's a wonderful feeling getting rid of all the lose edges.” Still confused? Talk to a friend who's been quilting for a while or the staff at a local quilt shop.
Still want it your way? Get a free quilt binding photo tutorial via Gratz Industries. 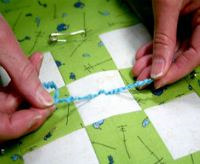 connectingthreads.com
An Easy Way Out: Tying a Quilt

Rather than sewing binding to the quilt's edges, you might consider quick-turning and then tying the quilt, as demonstrated in our T-Shirt Scrapbook Quilt How-To. Quick-turning is exactly like sewing a pillow: Sew on the ugly side and then turn it inside-out via a small hole you've left in the seams. Press the seams, and then tie small knots in the middle every 3 to 4 inches.
Learn how to make quilter's knots from Connecting Threads!

Be Bold, My Friends
With these plain-language tips, even new quilters will have the basics for creating their first quilt. But the most important thing? Play with it. "People should try [quilting] wherever they are and however they can," says Cox. And as her parting gift to you, Meg Cox would like to give you two easy even-first-timers-can-do-it patterns... free!

Excerpted from "The Quilter's Catalog" by Meg Cox, published by Workman Press.