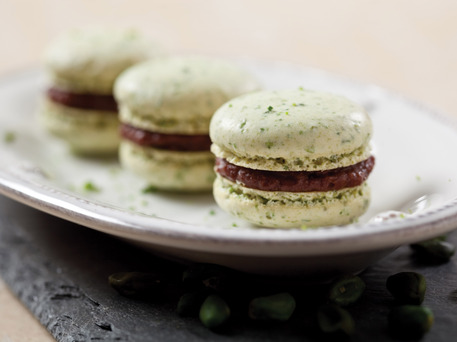 Move over, cupcake. There’s another popular pastry beginning to capture the U.S., one bakery at a time. With jewel-toned hues, a velvety texture, and a delicious history rooted in the culinary mecca of Paris, macarons are becoming the current must-have trendy treat.

Kathryn Gordon, a professional baking instructor and chef at the Institute of Culinary Education (ICE) in New York City, is obsessed with macarons (we’ll get to the necessity on the pronunciation bit in a minute, by the way). After 15 years of research and experimentation with the desserts, Gordon now teaches sold-out classes and and recently released the book, “Les Petits Macarons.” (Running Press). We asked her to give us the dish on these dazzling little desserts.

Why macarons?
Over the past eight years, there has been a growing popularity in macarons in the U.S. I can track that from the popularity of my macaron classes at ICE — I now teach ten different macaron-related classes there, and they fill up as soon as they're available. Some people have become obsessed. I think the first thing that hooks people is that they’re so pretty. They're like eye candy. Second, they taste good — and they're not as filling as a cupcake or a larger dessert. Third, people who try baking them seem to get very interested and seek out ways to perfect them. You can be so creative with the limited flavors of macaron shells, fillings, and combinations....

Why not "macaroons," as us American folk are used to saying?
Most Americans are used to eating coconut macaroons. There’s also a macaroon made with almond paste. These batters won’t make the characteristic UFO-style "pop up" shape of the Parisian-style macaron with a skin and the dome. The French-style macarons are typically made with almond flour, although they can be made with other nut flours, including one made from coconut. So you can bake a coconut-flavored French style macaron for a direct variation of the American macaroon.

What's your background in baking?
I always liked cooking. I started messing around with flour, water, and cocoa with my friend from Brownies when I was a kid. My poor parents had to eat these (horrible) creations! It wasn't until after business school, though, that I thought about what I liked as a hobby for a living. That's when I went to pastry school.

How did you and Anne McBride work together to create this cookbook?
Anne and I met at ICE when she came to work there several years ago as editor of the ICE recreational course catalog. She still does that on a part-time basis, and she's also finishing her PhD and teaches at NYU. Anne has written other cookbooks, like with Francois Payard, so she was my obvious choice when the book agent I was working with thought a co-writer would be helpful.

I've only made chocolate chip cookies and some (not so great) cake from scratch. Am I ready to embark on the baking of macarons?
Yes, I think so. I find the French Meringue Method pretty foolproof for novice bakers in my classes — it incorporates an easy way to whip the egg whites and sugar by a timer, so you don't need to know what "soft peak" looks like or how slow to "gradually add the sugar." You should start with that, or the method I came up with researching for the book we call "Kathryn's Easiest French Macaron Method." The base macaron recipes in the book have step-by-step photos to help people, and there's a troubleshooting chapter in the end in case your oven is "fighting you" and you need to make an adjustment in how to bake them successfully.

Cupcakes have been all the rage for far too long now. How are macarons a different dessert?
When I visit France, macarons are generally eaten in the afternoon with tea or coffee. I think people eat them at any time of day — they're like a bite-size treat. There are some restaurants that have them as a savory amuse bouche before the meal (and we have a chapter with savory fillings, for more adventurous eaters). They've also become popular in the U.S. for wedding favors.

Try eating them whenever and however you want: when we were recipe testing for the book, I brought some unfilled macarons to a dinner and everyone enjoyed pairing up their own flavored macaron shells with spoonfuls of filling. It was interactive and a lot of fun.

That sounds great. So, what kind of combinations work the best?
I think the potential for matching up shells and fillings in limitless. Most pastry shops sell macarons that are neutral flavored (usually with the almond flour). Almond is less expensive than many other nuts. We eat first with our eyes: if you see a yellow shell (colored with food coloring) filled with a zesty lemon curd, you think that the macaron you are eating is also lemon flavored. It probably isn't. So with a neutral (colored) shell — you can make any filling you want to try!

Green Tea and White Chocolate, Wasabi, and Lavender... There are so many interesting flavors and possibilities in this book! What's your personal favorite kind of macaron?
My favorite filling is the popcorn pastry cream. Patisseries can't necessarily fill macarons with a filling that needs refrigeration, but you can at home! My favorite combination from the book is the Carrot Cake. But there's nothing better than a "plain vanilla."

Other than the release of this cookbook, what else are you currently working on?
I decided this summer that I need to revamp my garden. Maybe it was the weather this year, and I'm by the beach so drainage from the soil into the sand base can be an issue, but I didn't get much yield this summer and even the perennials looked straggly. So I'm in the planning phase to build raised beds for organic gardening — I like to cook with flowers and herbs, so it will mostly be an edible garden, not for decorative purposes only.

Thank you, Kathryn, for giving us the dish on macarons! Our sweet tooth is now tingling...

For more on macarons, get Kathryn Gordon's new cookbook, “Les Petits Macarons.” And check out the recipe for the Fleur de Sel Caramel macaron filling here on CraftFoxes!