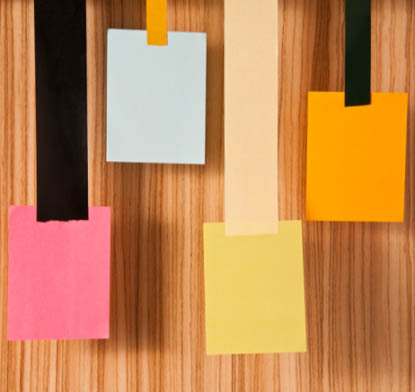 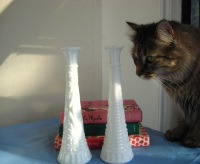 Resolution #1: I will try to keep the cats from taking over my studio.
If you’re a lady who works in a creative field, then you should’ve received your compulsory two cats by now. (If you haven’t, you should go to your local animal shelter and let them know about this oversight.) Mine are named Cookie and Roscoe, but judging by the number of times they pop up in the photos I attempt to take for my shop, you’d think I was assembling a small feline army. Give them a cat toy? You’re funny. They want to get into my stacks of vintage fabrics, roll on my finished aprons and get dangerously close to my sewing machine. Feel like cutting out a dress from a bolt of fine silk? Then I hope you feel like company. I can’t tell you how close I’ve come to trimming off a tail. Gross, I know. But true. In 2011, the itty bitty kitty committee will be relocated to another area of my home when anything crafty-related comes out, far away from my Gingher dress shears.

Resolution #2: No more crafty-blogger envy
Raise your hand if this has happened to you: While browsing through your RSS feed, checking out everybody’s projects, and then BOOM, here comes a sudden sense of terrible inferiority. I was chatting with a friend about this, how the sock-full-of-pennies that is blogger envy can strike when you least expect it. That’s because on the crafty internet, everybody’s projects seem perfect. And, when they share photos of their workspaces everything is organized and vaguely Swedish-inspired, not covered in Arrested Development DVD sets, color swatches and acres of unsorted pins waiting to unleash their pointy fury on your fingers. Their families are beautiful, the kids never make sullen faces at the camera and they all gather around at a sane time to eat a completely handmade locally-grown feast. And then all of the above activities are tastefully photographed around vintage props. Well, these people are not real. All those heavy-on-the-white-space blogs are actually ghostwritten by cyborgs. So it’s best to not take it all personally. (And you know what else helps? Sending a little fan note to your favorite bloggers. You make so many friends that way and it helps to know that there is, in fact, a real person behind the posts.)

Resolution #3: No TV while designing …

One second you’re happily finishing a seam, the next, you’re in hour 4 of a Keeping Up with the Kardashians marathon, wondering how long it takes for Bruce Jenner to put his face on in the morning. It’s the equivalent of taking one of those prescription sleeping pills. (My theory is that it’s because the Kardashian show doesn’t have a real beginning or end, instead, all episodes flow together like a river of mindlessness.) Instead, I’ll just listen to my iPod.

Made with the Keep Calm-o-Matic generator
Resolution #3a: … or phone calls
Either my mother calls frequently and begins every conversation with: “Brieanne, I saw the most terrible thing on TV today.” It is usually about the Kardashians. Soon enough, the sun has set and I’ve lost the natural light necessary for my projects not to photograph like messy mistakes. Voicemail will be my friend in 2011.

Resolution #4: Find time for creativity
All right, I know that this sounds corny. But I’m assuming that you’re just as short on free time as I am. By the time you finish your commute, pick up groceries, make dinner, etc., you’re really tired and don’t even want to look at that unfinished project. Or you’re too tired to think. This happens. But instead of looking at those pockets of free time as a one-way ticket to the couch, go to straight to your work area. I know, it’s really hard at the end of a long day to do that. But I’ve found that if I force myself to do a little sewing, embroidering or drawing, within 10-15 minutes I’m back to being an idea machine.

Resolution #5: Share those ideas
So many times I’ve held back from posting a photo of something I’ve made, because I feel like everyone else in the free world has already done what I did. Or because I think the photos don’t look as lovely as everyone else’s (see above, about Martha cyborgs). Or any of a thousand other negative excuses, which is completely absurd. What I like about the crafting community is that it’s just that: A community. And communities will remain small and/or dominated by a few voices if we all just keep our mouths shut, afraid to speak up. This year, let’s all share what we do and support each other.