Miniature of Landmarks made from pen refills 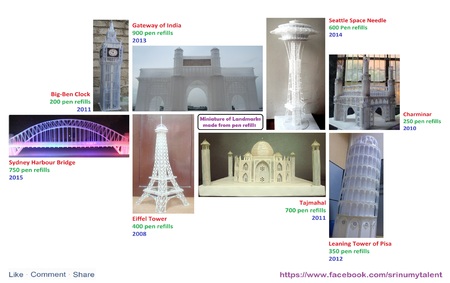 I have a passion to make miniature of famous landmarks from used pen refills. As of now I have made Eiffel Tower, Charminar, Big-Ben clock, Taj Mahal, Leaning Tower of Pisa, Gateway of India, Seattle Space Needle and Sydney harbour bridge.

I have a hobby of collecting used pen refills since 9th standard. After 4years I had a thought to make those refills into a reusable thing. As I had a hobby of making miniature houses from marriage invitation cards, I decided to make miniature of famous landmarks all over the world. In 2008 I made Eiffel tower. Later I conducted say no to plastic program in schools and colleges. As part of the program, I educate students on hazardous effects of plastic and setup refill collection boxes. So far this is the source for raw materials to make the structures. I also bagged India Book of Records in 2012 for making miniature of Tajmahal from 700 pen refills.