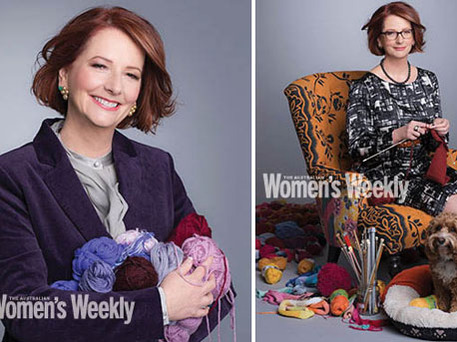 Were knitting photos what led to the downfall of former Australian Prime Minister Julia Gillard? Gillard was ousted by a party vote and replaced in office by Prime Minister Kevin Rudd, who previously held office in 2010. When thinking of photos that could devastate the credibility of heads of state, one might expect a flash of leg or a racy reference to an illicit amour. But skeins of yarn and knitting needles? As strange as it seems, Gillard, Australia’s first female Prime Minister, faced criticism when she posed for Australia’s Women’s Weekly knitting a baby kangaroo for British royals Kate Middleton and Prince William’s soon-to-arrive baby. Political and social commentators from around the world, including the Daily Mail (which said the pictures could “bring down the Prime Minister”), stated that the photos go against Gillard’s feminist principals. The controversy even launched its own Twitter hashtag: #knitgate.
Do you think the knitting photos led to Gillard's downfall? Read the Women’s Weekly’s article with Julia Gillard and updates from the New York Times.

Show us what you are knitting or crocheting this week! It’s easy to upload your project on CraftFoxes to share with the community. We’ll choose some of our favorite yarn projects to promote via the blog and social media. Come back every Monday to see what yarn project we are loving.