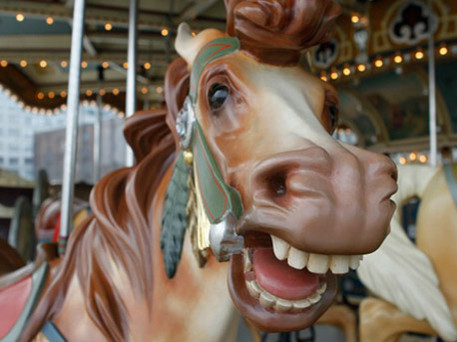 The early days of autumn have a tendency to bring out two things: A craving for comfort food and anything nostalgic. This week's edition of Craft Bits gives you the best of both worlds, starting with nostalgia.

And it doesn't get more nostalgic than a carousel. This one's owned by Jane Walentas, an everyday gal who just happened to buy a vintage carousel in 1984 and has spent the intervening 27 years meticulously restoring it to pristine condition. And it's not a museum piece: Walentas has set the carousel up in Brooklyn's DUMBO neighborhood. The price to take it for a spin? $2.
Read more about Brooklyn's vintage carousel on WNYC.

Associated Press
New Trend, Old Linens
Vintage linens are a surefire way to add a hint of old-school charm to your home. But they're also a hot commodity on the secondhand market, thanks to a resurgence of interest in these old-fashioned favorites. The best way to find them (other than inheriting them from Grandma)? Estate sales.
For more about the vintage linen trend, visit The Washington Post. 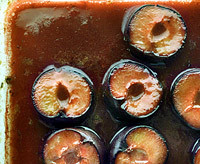 Witchita Falls Crave
It's Plum Season
We've never had much luck picking out the perfect plum at the grocery store, so we were glad to see this recipe, which turns those duds into deliciousness. Just bake them with a little bit of butter, a dash of orange juice and plenty of spice. How wonderful does that sound?
For the complete spiced baked plums recipe, visit Witchita Falls Crave.

Tara Striano Quirk Books
Where Did That Cookie Go Wrong?
If you've ever carefully measured your way through an unfamiliar (yet allegedly foolproof) recipe only to open the oven door to disappointment, this book is for you: "The Cookiepedia: Mixing, Baking and Reinventing the Classics." (Quirk Books, $19.95) In it you'll find tried-and-tested cookie recipes, plus suggestions on improving your results. And by improving, we mean "adding caramel corn to the dough." Yep, an actual tip! This book is so going on our bookshelves.
For more on "The Cookiepedia" visit The Sacramento Bee.

Lindsey Bee
Best Gift Ever: A Love Map
The worst thing about a vacation is, well, ending it. And a silly souvenir isn't so much a memory-prompter, but something eventually bound for the "to-donate" bin. Instead, commemorate your trip (or that of a favorite friend) with a custom, beautifully-illustrated poster from artist Lindsey Bee. Adorable.
For more about Lindsey Bee's work, visit The Los Angeles Times.
Rate this post 0.0 rating Report post