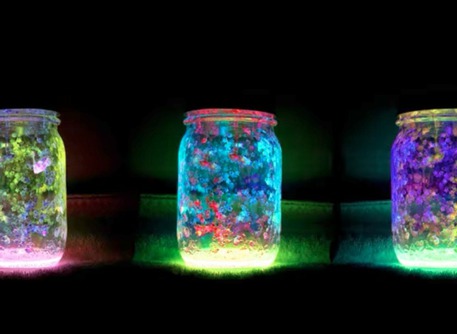 Glowing mason jars (also known as fairy lights) are out-of-this world fun for a number of reasons. They’re easy to make, add sparkle to a porch or any space you use in the nighttime, and only require low-cost materials. Depending on how you decorate the mason jars, you may use glow-in-the-dark paints, glow sticks or tea lights to create the illumination. A little glitter and glue can add even more pizzazz to the project. The following videos explain the easy steps to making these memorable conversations pieces.

The 15 million views on Nava Hannah’s “DIY: Fairy Glow Jars” underscore how popular this mason jar craft is. After dabbing stars on the inside of the jar, she covers the lid with glue and sprinkles on glitter to give the entire jar a shimmer.

Ethereal Jars Made with Glow Sticks

BunnieClaire creates her fairy glow jars with slightly different materials than Nava Hannah. Instead of glow-in-the-dark paint, she extracts the liquid from glow-stick bracelets. The effect is a little more techno ethereal than using glow-in-the-dark paint. Some parents may wonder if the glow stick liquid is harmful. According the various poison control centers, the substance is typically dibutyl phthalate, which is relatively low in toxicity, but can cause irritation on the skin or mouth if someone decides to swallow it. Claire mixes a few different sizes of glitter into the liquid and lets it dry to create the glowing glass.

Fairy Jars Made with Paper Cutouts

Michelle Lough’s approach to making fairy glow jars is very different than Nava or Claire’s. A paper cutout of a fairy translates the title of the project a bit more literally. Don’t worry about whether you have the ability to draw a fairy image. Michelle downloaded a template for the image, which can be found here, and cuts it out with an Xacto knife. Once the cutout is finish, you glue it to the side of the jar and then use a tea light to illuminate it. Moss on the bottom of the jar adds a grassy plain for the “fairy” to land on. Attaching plastic ivy suggests tree branches. The project is best left to teens and older. For those who love fantasy inspired decor, the jars are quite cute.