How to Papier Mache with Kids 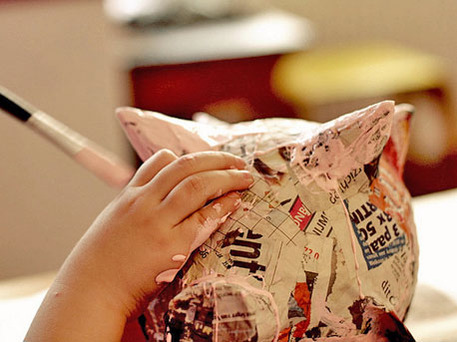 Papier mache requires nothing more than water, flour and paper — and lots of that last one. Great for a spontaneous afternoon crafting with kids, this messy home decor is fun and intriguing for the young ones while also inspiring even those jaded middle schoolers to get creative. Carol Endler Sturbenz, author of “Homemade: The Heart and Science of Handcrafts,” shares her favorite methods and insider tips for keeping papier mache (or simply paper mache, for those that prefer the non-French spelling) simple and spontaneous, while still as messy and fun as possible. 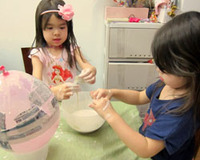 When making papier mache, only two things are really needed — an adhesive and paper. Keeping in mind that just about anything will work, there are some papier mache recipes that work slightly better than others. For example, Carol recommends flour paste, which crafters can make from household ingredients quite quickly. It's a nontoxic option for those crafting with young kids.

To make your own flour paste, Carol says, “Combine 3 tablespoons flour with 2 cups of water. Boil, mix until smooth and then let cool to room temperature.” The paste can be stored in the fridge for 3-4 days.

Carol notes that any kind of paper will work: "Tissue, recycled paper or newsprint, though ink may smear.” She’s especially a big fan of packing paper or blank, newsprint-weighted paper.

The last ingredient needed is an armature, or mold, which Carol says, “offers a shape that mimics the basic shape of what the kids want to make, like balloons for a bumble bee.” The armature can be anything. “Paper towel holders to make a kind of stick figure, or, for middle school-aged kids, plastic milk containers can be used for rocket ships, cars or even robots.” 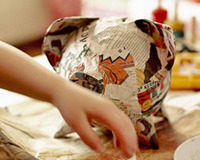 Methods to Our Madness

Once your ingredients are assembled, the next step is to start building your papier mache, and there are two different methods. One is good for all ages and the other is a slightly sophisticated papier mache technique that older students will appreciate.

For kids 4-5 years old, try the strip method where kids rip strips of paper and saturate them with glue. “The strips are then wrapped around an armature or core, like an inflated balloon or milk jug,” says Carol. “Most young kids like the security of having a core around which to wrap.” Kids then paint the dried shape and add details like wings, antennae or googly eyes.

The second method, a great craft for teens who have more hand dexterity, mashes paper into a pulp and then uses the pulp as a sculpting material, much like clay. Known as the pulp method, this papier mache technique works great with construction paper or recycled paper, both which have shorter fibers and are easier to saturate.

Carol directs teens to “soak the paper in flour paste until it is saturated. When it’s so saturated it begins to break up on its own and ends up looking like very thick oatmeal.” From there, the kids can begin to make a shape directly from the pulp.

For whichever technique you use to papier mache, the last steps are exactly the same. “Once the shape is made, let it air dry and then decorate,” advises Carol. “Normally, kids add two layers of papier mache, if using the strip method, and those layers would dry in 2 to 24 hours, depending on how large the item is. The thicker the layers, the longer it takes to dry.” Allow roughly 1 hour per layer or until the papier mache shape is completely stiff.

Make No Mistakes About It

Afraid of making mistakes with papier mache? Carol says not to worry: “Any mistakes, with rare exceptions, can be fixed.” With that said, there are a few blips that just about anyone making papier mache may run into. One includes a too-thin paper layer, causing a shape that doesn’t hold its form when dry. Adding more layers is the simple fix, says Carol.

Paper that’s too wet, with too much glue, will lengthen drying time. While not a problem, unless your young one is low on patience, parents may want to allow kids to coat just one side of the paper and use their other hand to smear the glue, says Carol, adding, “Really, kids only need to glue one side.”

Too-thin paper is another possible stumbling block, Carol recommends using a newsprint-like paper that’s free of ink, or even packing paper. But, of course, any paper will work and still look good. Some paper just works slightly better than others.

"The mess is part of the fun for the kids!” says Carol. Parents should know that papier mache is a messy craft. Carol adds, “I don’t think there is any way to avoid mess. Mess is going to be a part of the art experience.” Just be sure to protect your work surface with a garbage bag and your kids’ clothes with an apron or another garbage bag, and then allow the fun — and the mess — to have its way.

Carol Endler Sterbenz is the author of  "Homemade: The Heart and Science of Handcrafts," published by Scribner. You can also check out more of her crafts at Homemade.
Disclaimer: The author and CraftFoxes.com have made every effort to ensure that all instructions given are safe and accurate, but they cannot accept liability for any resulting injury or loss or damage to either property or person, whether direct or consequential and howsoever arising.