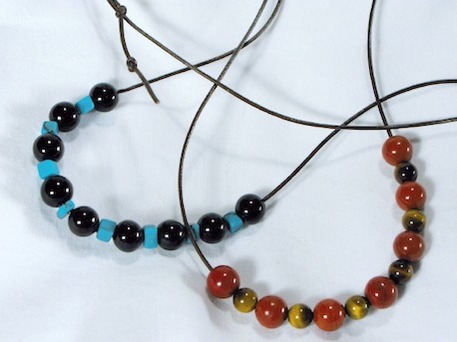 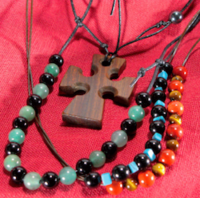 Some of the earliest, most primitive jewelery was made of beads, usually of horn or bone, threaded onto a cord. The use of cord — be it silk, cotton or especially leather — is still a useful option for the modern jeweler. These materials are not only less expensive than most metals, but are often better suited to particular designs; a chain of silver, for example, can be a distraction when used to support a simple, informal pendant. No metalworking skills are required; just find suitable beads and an appropriate cord, and tie the right knots.

The right knot can be more than just a matter of practical use. Knots have been used in jewelery-making for thousands of years and are often rich in meaning and symbolism. These things should not be ignored in the design of jewelery, which has so many sentimental associations. 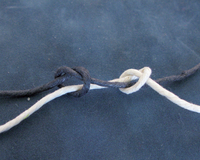 It will now be possible to pull on each knotted end, to shorten the necklace, leaving the knots lying at either side of the neck. A knot tied on each end after the slipknot will prevent the cord from slipping through the fingers.

The slipknot system can, of course, be used back to front, the double section of the cord passing through the pendant so that the slipknots lie out of sight at the back of the neck.

This kind of work can be confusing, so practice first with string; one end of this length has been dyed to make it easier to see how the system works.

As an alternative to the slipknot, a bead with a hole just large enough for two thicknesses of cord can be used as a tightening device. Check the hole in the bead carefully, as any sharp corners can damage the cord. Fine carborundum grit on a piece of string can be used to make the hole smooth.

Figure-Eight Knots
The figure-of-eight knot (known alternatively as the Savoy knot or the lover’s knot) is used in heraldry as a symbol of faithfulness. To tie this knot, form a loop in the cord, wrap the loose end around the cord below the loop, then pass it through the loop from the top.

An alternative way of combining beads and cord is a design where the beads hang vertically. Choose the beads, and then make a ring in silver just large enough to allow the largest bead to pass through. Tie a loose knot on the end of a three-foot (one-meter) length of cord, thread on the beads, and loosely tie off the other end. Fold the cord double and fasten it to the silver ring at its midpoint using a simple hitch knot. Instead of the silver ring a loop can be made in the cord itself, though this may be too plain and simple.

Each end with its beads can be passed through the ring separately to form the necklace. Once you have decided on the correct length of cord, the knots can be made permanent. As this forms the focal point of the necklace, a basic overhand knot is a bit too plain, so here a blood knot is used.

The Blood Knot
The blood knot is so called because it was tied on each of the nine ends of the cat-o’-nine-tails. The blood knot was also used by friars of the strict Capuchin order, as a simple way to add weight to the ends of the rope around their habits. A more mundane name for this knot is the multiple overhand knot.

To make a blood knot, begin with an overhand knot, then continue passing the end of the cord through the loop, three or four times. As it is drawn tight, both ends of the knot must be pulled with the fingers towards the middle, to form neat symmetrical coils. Leave at least 3/8 in. (10 mm) of cord beyond the knot to make it secure, and to show off its symmetry.

This necklace cords article is excerpted with permission from "Practical Jewelry-Making Techniques: Problem Solving" by Stephen O'Keeffe and published by Firefly Books.