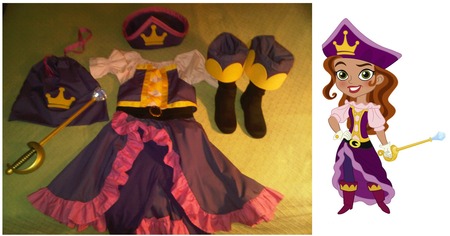 My daughter really wanted to be the Pirate Princess from Jake and the Neverland Pirates. Of course, being the crafty fox that I am, I took on the challenge. :-)

First, I should point out that the pink peasant blouse was beautifully made by funkylaundry (http://www.etsy.com/shop/funkylaundry), and the boots and leggings were bought at Wally World. The rest I did myself.

For the skirt, I used a simple circle skirt pattern (found here: http://www.danamadeit.com/2008/07/tutorial-the-circle-skirt.html) which I altered to add the open front. I started by making a test run with muslin, adjusted the sizing on my daughter as needed, then used the muslin version as the final pattern for the finished product. It's made from purple broadcloth with 2" black elastic around the waist. The ruffle is pink broadcloth and easily took more time to make than any other element of the costume. I had nightmares of being strangled by yards and yards of pink ruffle. The belt is 1" black elastic that I slid a gold-colored belt buckle onto and stitched closed so that it could be easily slid on and off.

The vest was made from the same material as the skirt. I had no pattern, so I made my own. My initial thought was to use ribbon to lace up the back like a corset, thus making it adjustable for a better fit, but the muslin version I made for my daughter to try on was too small. So I made a second version that could overlap in the back for a perfect fit. On the finished vest, I used Style Snaps to close the back so I could easily place them where they worked best. The gold boarder and crosses in the front are grosgrain ribbon sewn onto the vest.

The boot cuffs were made by sewing pockets into broadcloth pieces and cutting large craft foam sheets to fit. The gold accents are cut from stiff felt and glued to the edge of the cuffs. Casings were sewn on the opposite edge and ribbon was threaded through the casing. The idea was to wrap the cuff around the leg and secure it by tying the ribbon. Then the boots could be put on and the cuffs folded over the top of the boot. It worked perfectly. :-)

The hat started out as a foam pirate hat (imagine that!) I used foam left from the boot cuffs to fashion the point in the front, then tacked everything in place with needle and thread, including the sides of the hat to get the right curve. Then I covered the whole thing with, you guessed it, the purple broadcloth. I hand-sewed long scraps of the pink material folded over the edge and glued the crown that was cut from the gold felt. I created the pattern for the crown on my computer using Photoshop and the picture of the princess. Finally I added thin white elastic tinted with foundation to keep the whole thing on her head. (Yes, I used make-up to color the elastic. A trick I learned from my dance class days to make the elastic "disappear".) All-in-all, the hat was the least satisfying element of the costume. I put a lot of work into it, and just didn't care for how it turned out.

The bag was made from leftover material which was sewn into a simple bag. I sewed a casing into the opening and used pink twine to pull it closed. The handle was made from the pink broadcloth stitched into a long strip, turned inside out and sewn to either side of the bag. Then I used another felt crown made from my previous pattern and glued it to the front.

The Rainbow Wand, as it's called in the cartoon, was made by cutting off the end of a toy sword. Then I sanded it and painted it with gold paint. SEVERAL coats of gold paint. The crystal on the end is an acrylic Christmas ornament I found online. I used a hacksaw to cut the metal cap off the end and cut notches in it to match the cross pattern made by the sword. Then I used epoxy to affix it to the sword. Let me tell you, that thing would have made a good weapon if my kid needed to defend her booty bag from would-be swashbucklers. That crystal was heavy!